Cheadle Young Farmers will be taking to the roads with a Charity Tractor Run on Sunday 26th April in memory of one of their founder members, Stan Eyre and raising funds for Dementia UK and Cheadle YFC.

To book your place, please download a booking form here 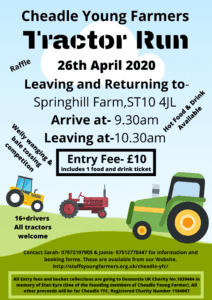 A great afternoon for members of Staffs YFC competing in the indoor cricket competition! 🏏

The results were as followed:

A massive thank you to Willow Sports Centre for hosting the league!

Staffordshire YFC are holding their Annual Dinner Dance on Saturday 14th March 2020 in the Ingestre Suite on the County Showground, Stafford from 7pm onwards.  The evening is set to be one to remember, with the theme of “Viva Las Vegas!”  Guests will be entertained by Mark Clay, local Elvis Impersonator and also be able to have a flutter in the casino as part of the evening which usually attracts around 400 members and supporters of the Federation.

This year, the Annual Dinner Dance is very kindly supported by Howard Worth, Accountants. Andrew Hagues, Partner – Farming and Rural Business at Howard Worth said “We are delighted to support the work that the Staffordshire federation of young farmers carries out in supporting the future of next generation farmers.  Howard Worth are pleased to sponsor this years Dinner Dance and look forward to working with farmers across Staffordshire in 2020 and beyond”.

To book a table, download a booking form here and return along with full payment no later than Monday 10th February 2020.

YFC to tour around JCB HQ and see the WFT

YFC members have been given an exclusive opportunity to tour around the JCB Headquarters in Rocester on the evening Thursday 19th December 2019.  Anyone who wishes to go must book their place via their Club Secretary or Club Chairman.  All under 18’s must bring a completed Permission Slip which can be downloaded here and be accompanied by a current YFC member who is over 18.