On Saturday 10th September Staffordshire YFC will be holding their first competition of the new membership year, hosted by kind permission of JA Bloor Agricultural Services Ltd at the Uttoxeter District Agricultural Society Ploughing Match Day. This year the competition is also being supported by Wharfe Rural Planning.

Fence Erecting is one of the many rural skilled competitions organised by Staffordshire YFC and gives members who work in teams of 3 the opportunity to utilise their skills to manually erect a stock proof fence using only hand tools to a specified standard, working as a team with clear communication and taking into account Health and Safety at all times.

After the competition, the two highest placed teams will go forward to the West Midlands Area round of this competition, which is part of the National Federation of Young Farmers Clubs competitions programme, in June 2023.

For information about this competition click here, or any aspect of Staffordshire YFC, including becoming a member, contact Julia Taylor, County Organiser, on 01785 248645 or email countyoffice@staffsyoungfarmers.co.uk for further information.

On Sunday evening 24th July 2022 12 rafts set sail at timed intervals down the River Trent from Little Haywood to Wolseley Bridges.  Each raft built and powered by 4 YFC members were timed individually with best times awarded to female and male teams.

Well done to all those that took part and those that helped to steward and put on this event, knowing that some of the rafts had been in dry dock since way back in 2018 (too much water in 2019) it was fantastic to see it’s return.

On Friday 15th July 2022 Staffordshire YFC was proudly represented by members from Ashley – George & Ruby, Uttoxeter – Mark Whitehurst, Waterhouses – Victoria Astle & Peter Cotton.  With over 70 competitors from all over England and Wales that had also qualified from 100’s of YFC members competing at their County rounds our members did fantastically.  Looking at a variety of dairy cattle breeds and in most classes looking at 2 different breeds, providing reasons to the master judge and also in the seniors completing a linear assessment – well done to them all.  Special congratulations to Peter Cotton being placed 3rd in the Intermediates and Mark Whitehurst being placed 3rd in the Seniors.

Following their success at the Staffordshire YFC Tug of War Competitions held earlier in the year at the Annual Rally and County Show, Waterhouses YFC took all three of their Tug of War teams (Men’s, Ladies and Juniors) to the West Midlands Area rounds of the competition, held at Ledbury Rugby Club, Herefordshire on Sunday 26th June.  Pulling against the highest placed teams from clubs in the neighbouring counties of Herefordshire, Shropshire, Warwickshire and Worcestershire, the teams from Waterhouses YFC all came out victorious after a hard day of pulling.

The Juniors aged 12 – 17 years, many of whom were taking to the competition for the first time this year, didn’t lose an end against any of their fellow teams and then pulled their way to victory against Shropshire YFC in the final.  In the Ladies category, the team only lost two ends in the whole competition and then they took on Herefordshire YFC in the final and came out with the first place.  The Men’s team, who were the reigning National Federation of Young Farmers Clubs (NFYFC) Champions in 2021, also didn’t lose an end and they took first place after a tense final against Shropshire YFC as well.

Speaking on behalf of the Club, Chairman, Bertie Clowes said “We are so proud to be in Waterhouses YFC and especially for the new junior members who have never taken part in Tug of War before this year.  To take first place in all three competitions in amazing and the time and dedication put in by the members has really paid off.  The teams would not be where they are without the team coaches who give such a lot of time to help train the teams too, so we extend a big thank you to them all too. We wish the teams the best of luck in the finals – we are sure they will make us proud no matter what the result.”

Teams also took part in the West Midlands Area round on Sunday from Cheadle YFC and Eccleshall YFC.  Staffordshire YFC will now be represented by Waterhouses YFC in all three National Federation of Young Farmers Clubs finals for Tug of War.   They will take on teams from across England and Wales on Saturday 6th August at Tenbury Show in Worcestershire.

To view photos from the day, please click here.

June 19th, 2022
A fantastic morning for lots of members at the Go-Karting competition! 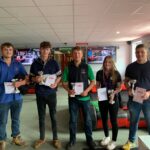 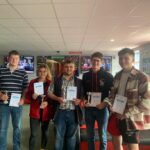 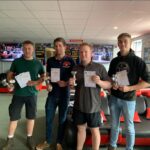 Jubilee Beacon lit at the end of the County Show

Staffordshire YFC finished a very active couple of days at the Staffordshire County Show, by marking the occasion of the Platinum Jubilee Celebrations, with the lighting of a beacon, as HM The Queen is the Patron of The National Federation of Young Farmers Clubs (NFYFC.)  The federation chose to light two beacons, which had been made by members at the Annual Rally held earlier in May.  Held at the top of the main car park of the County Showground,  the first place beacon, made by Steven Torr of Waterhouses YFC was lit by County President George Hawley, closely followed by the second placed beacon, made by Ed Foster Johnson of Lichfield YFC.  Ed lit his beacon, which also displayed the Staffordshire knot as part of the design.

Around 50 members and supporters of Staffordshire YFC enjoyed a very relaxing social atmosphere along with numerous boxes of pizza as the beacons flickered away whilst the sun went down on what had been one of the busiest County Show days ever seen.

Thanks must go to the Staffordshire and Birmingham Agricultural Society for allowing Staffordshire YFC to hold this evening on the showground site.

Waterhouses YFC round off the County Show with another win!

The Overall Float Competition was won by Waterhouses YFC who recreated “Chitty Chitty Bang Bang” complete with a flying car, the kids chained up by the child catcher and a fantastic display of craftmanship and design.  Second place was awarded to Abbotsholme YFC who’s float was re-creating “Matilda”.  As the only school club in Staffordshire, the members were able to show off their singing and dancing skills as well as all being in character.      In third place was Ashley YFC again this year, re-created “Alice in Wonderland” the main ring.  They had all the favourite characters on their float and were acting out scenes from the musical at the Mad Hatters Tea Party.  Fourth place was awarded to Uttoxeter JNFU who had the big top and circus on their float, depicting “The Greatest Showman!”

Leek YFC were awarded the Best Name Board Shield for their well-designed sign for their Float, Shrek, which was created by Ellie Platt, the Club Secretary.  This part of the competition was judged by Mr & Mrs S Cartmail, Vice Chairman and Mr & Mrs A Sneddon, Vice President of the Staffordshire & Birmingham Agricultural Society.

Members on the Show Floats from ten clubs entertained the huge crowds and judges as they circled the Main Ring.  Staffordshire YFC thoroughly enjoy providing this entertainment to the general public and raising their profile, as a rural youth organisation which is all about fun, teamwork, learning and opportunities for anyone aged 10 to 28 years.  They also enjoyed a great water fight at the end, which is the most favourite part for many members, who cooled off after a very sunny show day.

Staffordshire YFC has had an amazing two days at this year’s County Show.  They have been celebrating 70 years of Staffordshire YFC inside the “Platinum” themed marquee has been full with visitors over the two days.  Members from all clubs have had the opportunity to meet potential new members as well as chatting to former members who have enjoyed reminiscing with the displays from the previous seven decades.  County Chairman, Toby Hall commented that “We have had a great couple of days here at the County Show.  It’s great to see YFC back to what it does best and promoting themselves so well inside our fabulous marquee.  All the clubs have worked so hard building up to this week and its great to see them all so well rewarded with the support from the crowds.”

All 10 clubs had been working for months putting together their floats to the theme ‘West End Musicals’, the sun shone on the Thursday of Stafford County Show and the water fight was enjoyed by all.  A big thank you to B D Fuels who very kindly sponsored the prize money for this Competition.  The results were:

Please take a look at the photos HERE

After a brilliant first day at the County Show, Staffordshire Young Farmers held their Male and Female Tug of War in the Main Ring on Wednesday evening, 1st June.   A full grandstand of supporters from across the County and other clubs also turned out in force to watch a hard-fought competition. Many of the teams have been training three times a week since the new year and their hard work and efforts paid off.

With a record number of entries in both competitions and following a great standard of pulling the results on the evening for the male competition were:  Waterhouses YFC just took the top spot away from Cheadle YFC taking the 1st place position after a very close finish.  Cheadle YFC were the runners-up and Eccleshall YFC took 3rd place.

The 1st and 2nd placed teams from each competition will now go forward to the West Midlands Round of the competition at being held on Sunday 26th June in Ledbury.

Tug of War remains an ever popular competition which encourages members to work together as a team with long terms benefits of improvement of fitness, strength and technique as well as discipline, enjoyment, sportsmanship, respect and teamwork.

To view a full selection of photos from the evening, please click here.

Each Club has 1m x 1m cube to promote their Club at this years Stafford County Show, the displays are judged and the results were:

Photos from the competition can be found HERE