On Sunday 29th November, Staffordshire YFC held the first set of competitions towards their popular Public Speaking Day Competitions.  Due to the ongoing pandemic, the team competitions – Junior Reading, Junior Speaking, Intermediate Brainstrust and Senior Debating have been postponed until 7th February 2021.  However, the Member of The Year (18 and Under/19 and Over) along side the Situations Vacant Competitions were held via zoom.  The two days of competitions are being kindly sponsored by B and B Tractors, supporting YFC members to build confidence, team work and public speaking skills which will be invaluable later in life.

After a day of interviews, the results were as follows: 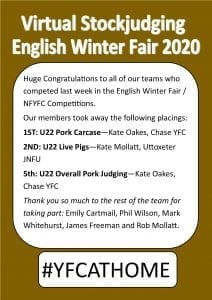 Most Improved Club – Competitions Cup: Awarded to the Club that has achieved the highest improvement in points for competitions from the previous year.

Mr Ken Unwin MBE Memorial Cup: Awarded to the Club who most improves in Public Speaking, Stock Judging and Carcase Judging from the previous year.

Junior Merit Award: This is presented to the most outstanding junior individual at Club or County level was presented to Molly Sammons of Eccleshall YFC.

5 a side Football Competition

The first active  competition of year, 5 a Side Football – huge thanks to Powerleague in Stoke for hosting this for us. Results were as follows:

Congratulations to all for taking part.

Great to have 8 entries for this competition, to showcase all the great work of YFC Clubs across the County.  The results were as follows:

Following some excellent entries of a very high standard, all held via the YFC Facebook Page, the results were as follows:

Youth Forum “Pets we are Proud of” Photo Competition

1st – Liv Larsson of Ashley YFC with “I’m a Celebrity, Get Me out of Here!”

After over a whopping 160 entries were received, the overall results were:

Congratulations to everyone who took part.

Congratulations to the teams playing in the volleyball on Sunday 15th March 2020. 🏀

After some great leaping, jumping, falling and flying after the ball the semi finals and finals were held and we found this years winners!

Thank you to Like nanna made caterers for sponsoring the cookery this year!

Well done to all the competitions and thank you to our judges for giving up their time this evening!

💥💥 Well done to all who took part in the clay pigeon shoot competition! 💥💥

Thank you to Basford Shooting Ground Staffordshire for hosting us today!

The prizes were kindly donated by Clay Pigeon Shooting Association! Some of Staffs CPSA were present and said they’d love to see more of the members having a go and getting involved too!