Members of Eccleshall and Uttoxeter Young Farmers Club (YFC) sang their way to second place at the National Federation of Young Farmers (NFYFC) Competitions Day on Saturday 6th July, held locally at the Stafford Showground.  The club formed the joint choir made up of a group of 15 members aged between 13 and 27 years, many of whom had not sang in public before, after their success at the West Midlands Area round of this competition.  They have been practising for many hours with the enthusiastic guidance of Eccleshall members Imogen Bloxham and Harriet Wilson, who choreographed the two singing pieces, one of which had to be from the Top 40 singles from 1st January 2018 to 1st January 2019 and the second piece could be of the teams own choice.  The team sang “I’ll be There” by Jess Glynne and then in contrast, “Africa” by Toto, both of which were very originally performed including some solo sections and six very bright umbrellas as props.  The national competition was marked with the following criteria: Choice of Programme; Accuracy and Intonation; Quality and Balance; Interpretation; Overall Ensemble and Presentation; Appropriateness and Creativity of Movement.  The team scored 207 marks out of a possible 240 and were only 5 marks away from the first placed team, Devon YFC.

Harry Bowers, Club Chairman of Eccleshall YFC said “It has been great to see how the members from two clubs have all come together.  The final performance showcased our weeks of hard work and we have come such a long way since the county competition back in November last year.”

Competitions are a very important aspect of YFC, offering members new opportunities to develop their confidence, skills and learning.  The Choir Competition is aimed to help members learn new performance techniques, develop musical skills and experience singing to a large audience which, on Saturday, was over 400 members, supporters and associates of YFC from across the country. 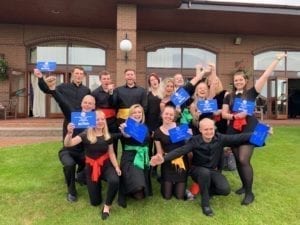 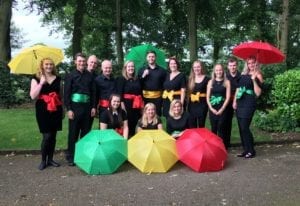