YFC Stock and Carcase Competitions at The English Winter Fair 2017

Warwickshire YFC sweep the board!

Warwickshire YFC members were a whopping 35 points ahead of fellow West Midlands Area county, Herefordshire taking the top spot for Overall Team at the English Winter Fair YFC Stock and Carcase Judging Competition held on Sunday 19th November.  The members, from the Hall Family and Jeyes Family, fought off a very high standard of competition from over 140 young farmers’ members across 19 teams entered into this year’s English Winter Fair YFC Stock and Carcase Judging classes.  The one day competition was hailed a great success with members praising the facilities, organisation and format of the competitions thanks to Staffordshire Young Farmers members and supporters who all give up their time to judge, steward and assist on the day.  Staffordshire YFC County Organiser, Julia Taylor said “We had 19 teams entered from 16 counties across England and Wales this year and this resulted in a very high level of competition yesterday. The weekend has been enjoyed by all members, some of whom travelled to Staffordshire the night before and enjoyed a meal and disco at the YFC Dinner kindly supported by Bagshaws LLP.”

The English Winter Fair took place at the weekend, 18th – 19th November and the YFC classes were kindly sponsored by AHDB (Agriculture and Horticulture Development Board) with very generous prize monies on offer. Young Farmers were able to judge Live Lamb and Beef classes and Beef and Pork Carcase Classes thanks to support from the show organiser, Staffordshire & Birmingham Agricultural Society along with AHDB.

In the Live Lambs class, judged in Bingley Hall, with the lambs kindly provided by Mrs Madders & Mr Johnson, the highest scoring Senior Competitor was Rhiannon Philip of Glamorgan YFC with 94 points and in the Intermediate Section, it was Victoria Sercombe of Leicestershire YFC with 96 points.  The highest scoring team in this class was awarded to Grace Hall and John Jeyes of Warwickshire YFC scoring a combined total of 177 points.

The Live Beef class was judged in the stalls, with some fine cattle provided by the exhibitors at the show.  In a joint position, the highest scoring Senior Competitor was Alastair Hughes of Leicestershire YFC and David Jeyes of Warwickshire YFC, both scoring 90 points.    In the Intermediate Section, Reece Howells of Shropshire YFC came first with 96 points.  As a team, Warwickshire YFC took first place in this class, with members David Jeyes and Alexandra Hall scoring a combined total of 185 points.

The Carcase Classes were all judged in the excellent Carcase Hall facility with carcasses very kindly provided by Messrs Bradshaw Bros.  In the Beef Carcase class, the Overall Senior Competitor was won jointly again by Rebecca Green of Shropshire YFC and James Jones of Herefordshire YFC with 92 points.    The Overall Intermediate Competitor was local girl, Alice Baskerville of Staffordshire YFC with 83 points.  .  The Overall team in this section was won by the Herefordshire team, members Will Layton and James Jones had a combined total of 165 points. 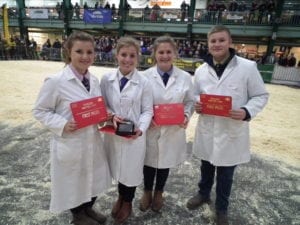 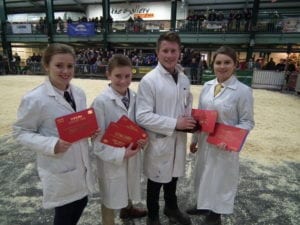 After a full day of judging the Birmingham Agricultural Exhibition Society Silver Challenge Cup, for the Overall Team on the day was awarded to Warwickshire YFC after they gained a whopping 708 points in all the classes.  They were followed by Herefordshire YFC in second place with 673 points and in third place, Radnor YFC with 660 points. 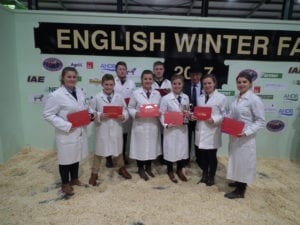