Staffordshire County Federation of Young Farmers Clubs (SCFYFC) County Rally was held on Saturday, 12th May at Overton Farm, Hollington, Nr Tean by kind permission of J A Bloor Agricultural Services Ltd and was once again this year, a great success for the strong eleven Staffordshire Clubs. The Rally day was filled with sunshine and fun with a great turnout of over 250 members along with sponsors and supporters to cheer on their Clubs in the various competitions. Members have been preparing weeks ahead to enter the Static Classes ranging from making “A Show Stopper Dessert,” creating cuddly Unicorns, Wizards sets and Photography as well as taking part in plenty of action competitions on the actual day including Tossing a Sheaf, Boys Egg Challenge and racing a Soap Box down a rather steep hill in order to try and win some silverware. 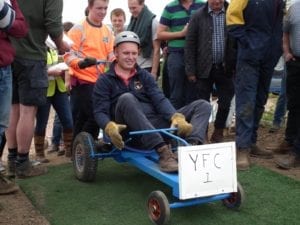 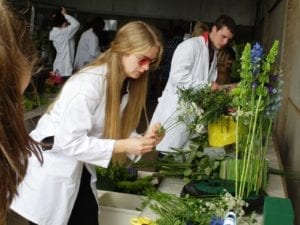 The main ring held a huge “Total Wipeout” Competition with teams of up to 6 members from each club taking part. This was a great success, with members loving the assault course of various challenges including jumping through tyres and crawling through tunnels with everything involving lots of water, the overall winners of the Sports Cup from this competition were Ashley Young Farmers. 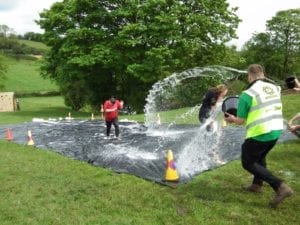 The highlight of the day was the ‘Soap Box’ race which involved two members racing a homemade ‘Soap Box’ down a rather steep course, each club was timed and the winners were Ashley YFC. Hosts, J A Bloor also held their own race which attracted members of the public to have a go too.

The highly competitive Junior Tug Of War competition, which is a National Competition for 2018 sees the highest two place teams go forward to the Three Counties Show at Malvern in June. Members aged between 12 and 17 years from Waterhouses YFC took 1st place and newly formed club, Cheadle YFC took the 2nd place. The day was rounded off by the ever popular Mixed Tug of War competition, which saw 6 teams taking part, and Waterhouses YFC, taking the silverware for the day, beating Stone YFC in the final.

Young Farmers always like to help other charities and despite an extremely busy day, they raised £485 for Young Minds with Uttoxeter Young Farmers peddling an exercise bike from 9am to 9pm on the Rally Day. J A Bloor also organised a digger challenge for members of the public and YFC members to have a go at, in return for a donation to help a local young boy, Beau, who needs an operation to help him to walk, which will take place in America. The digger challenge raised £500 on the day.

Back at Overton Farm that night, the Results and Trophies were announced and presented on behalf of the hosts, Jason and Janine Bloor of J A Bloor Agricultural Services Limited, at the Rally Dance. The night saw over 220 members and guests letting their hair down and celebrating a fantastic day of competitions, dancing to “Fresh Events.” The full set of photos from the day can be found here.