Waterhouses YFC round off the County Show with another win! 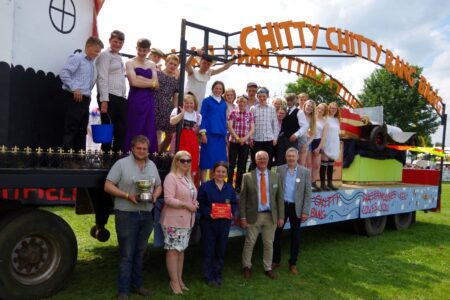 The Overall Float Competition was won by Waterhouses YFC who recreated “Chitty Chitty Bang Bang” complete with a flying car, the kids chained up by the child catcher and a fantastic display of craftmanship and design.  Second place was awarded to Abbotsholme YFC who’s float was re-creating “Matilda”.  As the only school club in Staffordshire, the members were able to show off their singing and dancing skills as well as all being in character.      In third place was Ashley YFC again this year, re-created “Alice in Wonderland” the main ring.  They had all the favourite characters on their float and were acting out scenes from the musical at the Mad Hatters Tea Party.  Fourth place was awarded to Uttoxeter JNFU who had the big top and circus on their float, depicting “The Greatest Showman!”

Leek YFC were awarded the Best Name Board Shield for their well-designed sign for their Float, Shrek, which was created by Ellie Platt, the Club Secretary.  This part of the competition was judged by Mr & Mrs S Cartmail, Vice Chairman and Mr & Mrs A Sneddon, Vice President of the Staffordshire & Birmingham Agricultural Society.

Members on the Show Floats from ten clubs entertained the huge crowds and judges as they circled the Main Ring.  Staffordshire YFC thoroughly enjoy providing this entertainment to the general public and raising their profile, as a rural youth organisation which is all about fun, teamwork, learning and opportunities for anyone aged 10 to 28 years.  They also enjoyed a great water fight at the end, which is the most favourite part for many members, who cooled off after a very sunny show day.

Staffordshire YFC has had an amazing two days at this year’s County Show.  They have been celebrating 70 years of Staffordshire YFC inside the “Platinum” themed marquee has been full with visitors over the two days.  Members from all clubs have had the opportunity to meet potential new members as well as chatting to former members who have enjoyed reminiscing with the displays from the previous seven decades.  County Chairman, Toby Hall commented that “We have had a great couple of days here at the County Show.  It’s great to see YFC back to what it does best and promoting themselves so well inside our fabulous marquee.  All the clubs have worked so hard building up to this week and its great to see them all so well rewarded with the support from the crowds.”