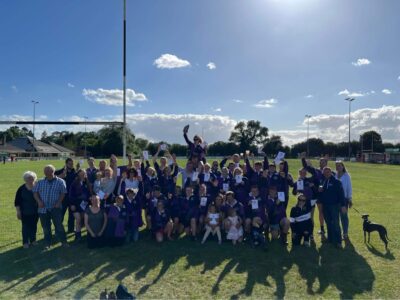 Following their success at the Staffordshire YFC Tug of War Competitions held earlier in the year at the Annual Rally and County Show, Waterhouses YFC took all three of their Tug of War teams (Men’s, Ladies and Juniors) to the West Midlands Area rounds of the competition, held at Ledbury Rugby Club, Herefordshire on Sunday 26th June.  Pulling against the highest placed teams from clubs in the neighbouring counties of Herefordshire, Shropshire, Warwickshire and Worcestershire, the teams from Waterhouses YFC all came out victorious after a hard day of pulling.

The Juniors aged 12 – 17 years, many of whom were taking to the competition for the first time this year, didn’t lose an end against any of their fellow teams and then pulled their way to victory against Shropshire YFC in the final.  In the Ladies category, the team only lost two ends in the whole competition and then they took on Herefordshire YFC in the final and came out with the first place.  The Men’s team, who were the reigning National Federation of Young Farmers Clubs (NFYFC) Champions in 2021, also didn’t lose an end and they took first place after a tense final against Shropshire YFC as well.

Speaking on behalf of the Club, Chairman, Bertie Clowes said “We are so proud to be in Waterhouses YFC and especially for the new junior members who have never taken part in Tug of War before this year.  To take first place in all three competitions in amazing and the time and dedication put in by the members has really paid off.  The teams would not be where they are without the team coaches who give such a lot of time to help train the teams too, so we extend a big thank you to them all too. We wish the teams the best of luck in the finals – we are sure they will make us proud no matter what the result.”

Teams also took part in the West Midlands Area round on Sunday from Cheadle YFC and Eccleshall YFC.  Staffordshire YFC will now be represented by Waterhouses YFC in all three National Federation of Young Farmers Clubs finals for Tug of War.   They will take on teams from across England and Wales on Saturday 6th August at Tenbury Show in Worcestershire.

To view photos from the day, please click here.