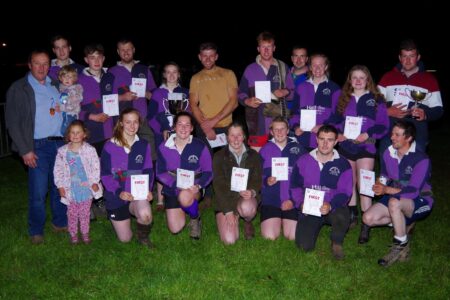 After a brilliant first day at the County Show, Staffordshire Young Farmers held their Male and Female Tug of War in the Main Ring on Wednesday evening, 1st June.   A full grandstand of supporters from across the County and other clubs also turned out in force to watch a hard-fought competition. Many of the teams have been training three times a week since the new year and their hard work and efforts paid off.

With a record number of entries in both competitions and following a great standard of pulling the results on the evening for the male competition were:  Waterhouses YFC just took the top spot away from Cheadle YFC taking the 1st place position after a very close finish.  Cheadle YFC were the runners-up and Eccleshall YFC took 3rd place.

The 1st and 2nd placed teams from each competition will now go forward to the West Midlands Round of the competition at being held on Sunday 26th June in Ledbury.

Tug of War remains an ever popular competition which encourages members to work together as a team with long terms benefits of improvement of fitness, strength and technique as well as discipline, enjoyment, sportsmanship, respect and teamwork.

To view a full selection of photos from the evening, please click here.