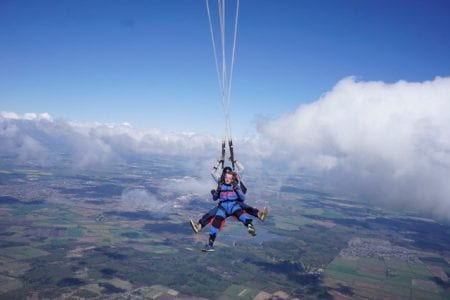 Uttoxeter Young Farmers have been missing holding their usual annual fundraising events during the last year which would normally include a Christmas Buffet and Pig Race.  The Club Officers really wanted to ensure that they raised some valuable funds for their chosen charity, The Farming Community Network as well as bringing in funds for themselves to keep the club running.  After discussions, they decided to put aside the usual sponsored bike rides and raffles, instead taking to take the plunge with a sky dive from 15’000 feet!!

Toby Hall, Club Chairman; Kate Mollatt, Club Secretary; Eddie Phillips, Club Treasurer along with Francis Mollatt, Club President, nervously headed over to Skydive Hibaldstow in Lincolnshire on Wednesday 5th May.   They took to the skies and once they had reached the summit of 15,000ft where it was minus 25c, they all braved the jump, peaking at speeds which were approximately 120mph when free falling and falling 10k feet in about 60 seconds.

Toby Hall, Club Chairman said “Releasing the parachute to drift back to earth made us realise how cold we were and how beautiful north Lincolnshire was.  We could see all the gorgeous landmarks such as the Humber estuary, the coastline and Scunthorpe Steel works! We all enjoyed the experience with varying levels of excitement and enjoyment and can safely say we are all safe and sound with all feet firmly planted on the ground.”

Following the dive, these brave club officers have currently raised over £1600 which will be split equally between the Club funds and The Farming Community Network, a national voluntary organisation and charity that supports farmers and families within the farming community.  Messages of support and thanks have been flooding into the Club’s Facebook pages as the video of their experience was posted, making their fellow members and supporters very proud of their achievement.

Uttoxeter Young Farmers continue to provide vital youthwork services which enable young people living in the rural communities of Uttoxeter and the surrounding area have somewhere to go, learn new skills and make like-minded friends for life in current times and for future generations.  Anyone interested in joining Uttoxeter Young Farmers can contact their Club Chairman, Toby Hall, on 07972 189021.