Top judging in Stockman of the Year 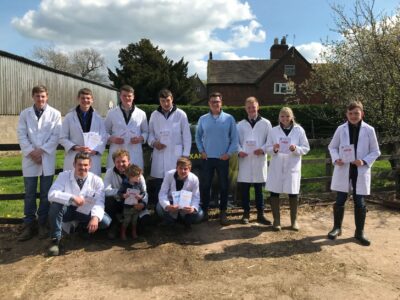 On Sunday 24th April Staffordshire YFC held their second Stockjudging event, Young Stockjudge and Stockman of the Year Competition, hosted by kind permission of The Rushton Family, Upper Leese Hill Farm, Kingstone. The day was generously supported by KiwiKit Roxan and members were also able to win prize money kindly donated by The Staffordshire and Birmingham Agricultural Society.  There were eight teams taking part from across Staffordshire, with teams of twelve competitors judging four rings of animals – Dairy cows, Breeding Ewes, Butchers Lambs and Beef Cattle and placed them an order of merit, followed by delivering positive comparative reasons to the master judges.

Stockjudging is one of the many competitions organised by Staffordshire YFC and gives members the opportunity to utilise their skills with regards to judging and understanding of the make-up of an animal, market demands, and communication, observation and presentation skills which are transferrable in their future career or education path.  During Covid 19 in 2020 and 2021, these competitions did move to a virtual online format, but as with many aspects of YFC, members thrive on meeting fellow members from across the county, with Sunday being no exception.

Will Roobottom of KiwiKit Roxan attended the day and said “KiwiKit Roxan Bring New Zealand Solutions to British Farmers, Fencing Contractors and Veterinary Surgeons. Our aim is to provide good quality product that will do the job at the right price with a first-class service to our customers.  We were pleased to see the next generation of young farmers taking part in this competition, giving them a valuable skillset and enabling them to succeed.”

The results on the day were as follows:

Once the team points had been combined, the clubs were positioned as follows:

After the competition, a composite team made up of the highest placed competitors in each age category will go forward and represent Staffordshire YFC at the West Midland Area eliminator on being held later in the year, hosted by Worcestershire YFC.

To view a selection of photos from the day, please click here.