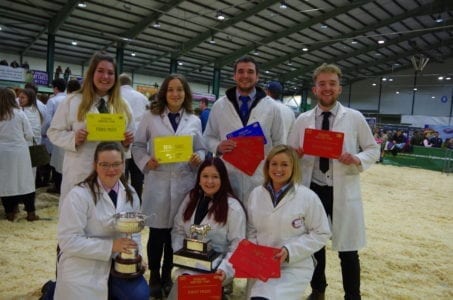 Staffordshire Young farmers proved the future of livestock farming in the county is in safe hands after their award-winning performances at National Federation of Young Farmers Clubs (NFYFC) Live and Carcase Judging competition finals at the English Winter Fair in Staffordshire this weekend. Following a great day on the Saturday judging Live Beef and Live Lambs, kindly provided by the exhibitors, competitors returned on the Sunday judging lamb and beef carcase, kindly provided by Messrs Bradshaw Bros. The facilities in the carcase hall and the Show, provided by the English Winter Fair committee ensure that this competition can be held with the highest quality of stock and meat to judge.

The Overall Team Award, and the much coveted The John Spear Trophy was awarded to Staffordshire YFC members Harriet Wilson, Robert Mollatt, Emily Cartmail and Jake Manning, after their efforts on the weekend took them 9 points ahead of the runner up team, Lancashire YFC. Staffordshire YFC also won this award in 2013 and 2015.

Taking home the coveted Bob Williams Trophy for the highest placed senior team in the competition was Harriet Wilson of Eccleshall YFC along with her team mate, Jake Manning of Lichfield YFC. They were a clear 19 points ahead of the team from the runner up team, Cumbria. Harriet said “I am over the moon. I have enjoyed being involved in this competition so much and made so many friends through it.” Harriet also credits the competition with influencing her career in meat retail as she is now ALDI’s Corporate Responsibility Manager with responsibility for farming, fish, deforestation and fair trade. “It has always been my favourite competition if I hadn’t got into Stockjudging, I wouldn’t have joined young farmers and as a result ended up working in the meat industry. Stockjudging really set me on my path for what I wanted to do.”

The weekend has been a great event with young farmers across the country coming together to compete in these important competitions which develops members skills in Stockjudging and public speaking. 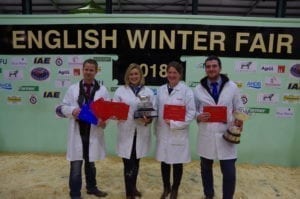 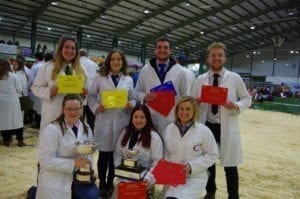 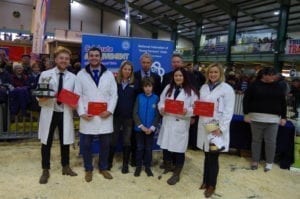