On the usual week that would have been the Staffordshire County Show, the highlight of the rural calendar in Staffordshire, YFC members from across the county have been busy entering virtual competitions organised by the Staffordshire Federation of Young Farmers Clubs.   The competitions were along similar lines to what would normally take place during show week, except for Tug of War, which would have proven tricky to execute.  Instead, using the county’s Facebook page as a platform, with over 4000 followers, five competitions were held.  On Tuesday 26th May, which would usually be the Pre Show Reception, an evening held for over 250 invited guests to attend at the YFC Marquee, the YFC Clubs entered into two competitions.

Firstly, The Leslie T Chester Competition which is a challenge to write a 500 word story using 15 given words.  The winner of this competition was Beckie Phillips of Uttoxeter Young Farmers Club, who wrote a very entertaining story about Hedgerow Farm and two resident goats called Hetty and Horatio who dreamt of flying in a spaceship!  The Award for the Leslie T Chester Story will be presented to Beckie at the County AGM which is due to be held later in the autumn.   The second and very popular competition held on Tuesday was the “YFC’s Got Talent” which is always greatly entertaining for guests usually at the Pre Show.  There were six strong entries including a comedy sketch in a Two Ronnies style from Cheadle YFC and an entertaining “Summer Loving” Grease duet from Uttoxeter Young Farmers.  After votes were counted via the Staffordshire YFC Facebook page as well as two independent judges giving their verdict, Eccleshall Young Farmers were declared the winners with a video compilation featuring members past and present from their Club, singing Bohemian Rhapsody, edited carefully by Daniel Moseley with flawless links, amusing costumes and varying vocals.    Tuesdays competitions were very kindly supported by Abbotsholme School and HSKS Greenhalgh Accountants.

On Wednesday 27th May it was the turn of the younger members of YFC aged 17 and under to take the lead, with two competitions displaying their love of animals.  The first competition was photos entitled “Pets we are Proud of” which included a Bearded Dragon, an array of dogs and cats and even a horse which regularly turns into a unicorn for local young children.  The winner was declared as a prize-winning sheep put forward by Ellie Roobottom of Chase YFC.  The second competition was “Best Trick with my Animal” where members were asked to submit photos or videos displaying their tricks.  The winner was Heidi Clark of Uttoxeter Young Farmers with her spaniel Tilly who completed an extensive obstacle course in great enthusiastic canine fashion.  The two competitions on Wednesday were kindly sponsored by Shires Vets, who would normally be part of the Staffordshire YFC marquee during the County Show week.  Dave Allen and Jen Robinson of Shires Vets also judged the two classes and said “We would like to thank Staffordshire YFC for asking us to get involved in this year’s Virtual YFC County Show. All of the team here at Shires Vets are proud to continue to support such a brilliant group of young people. We have had a great selection to choose from so thank you to all the members who have taken part and submitted photos and videos for today’s competitions we have really enjoyed judging them, well done to the winners and we look forward to seeing you back in the marquee next year!” 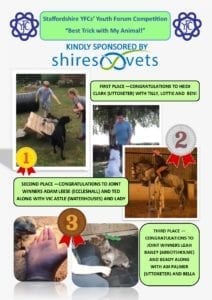 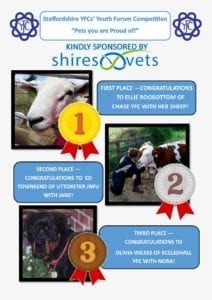 One of the most popular competitions is usually held on the Thursday of the County Show, the Show Floats Competition, which always attracts a great crowd around the main ring at 2.30pm.  The creative idea to make “Shoe Box” Show Floats was put forward by Leek Young Farmers and was soon made into a reality, with 17 entries taking to a “virtual main ring” created on the Staffordshire YFC Facebook page.  Supporters of YFC have been giving some great feedback about how it was great to see the efforts made by YFC members during lockdown, cheering them up on social media newsfeeds, despite not being able to meet up weekly as they would normally.   The 17 floats were judged again by the number of “likes” each float received as well as Dewi Parry, Chairman of the National Federation of Young Farmers Clubs, giving his top placings too.  On a normal County Show year, YFC is always very well supported by BD Fuels of Hixon who generously sponsor this competition with prize and entry money for all clubs who take part.  Despite the challenging climate, BD Fuels very kindly donated club prize money for 1st, 2nd and 3rd placed floats again this year, for which Staffordshire YFC is very grateful.

After a very active day on social media and a tense wait after “likes” and judges placings were combined, the results were Liv Larsson of Ashley YFC in first place with her “I’m a Celebrity…Get Me Out of Here!” float which had some very familiar faces superimposed onto the contestants.  The set up was complete with the Dingo Dollars Challenge and a helicopter Sky Dive setting!  In second place was Beth Allen of Cheadle YFC who recreated that daytime favourite, “Supermarket Sweep!”  The attention to detail with the aisles of food and trolleys inside the shoebox were a big hit with the judge.    There were two entries taking joint third place, Jemima Brown of Abbotsholme YFC with the ski gameshow, The Jump and Emma Mayers of Ashley YFC with The Great British Bake Off. 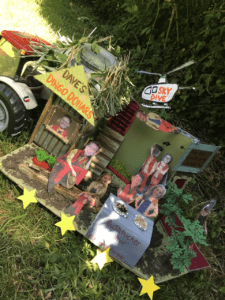 Dewi Parry, judge said “The competition standard has been immense, all seventeen entries were fabulous and everyone made a great amount of effort!”

Staffordshire YFC currently has 430 members across ten clubs in Staffordshire.  Club meeting nights usually run on a weekly basis, with a wide range of activities available for members of all ages including sports, public speaking, cinema and bowling trips, quizzes and farm walks.  Although not all members are from an agricultural background, the clubs in Staffordshire are based in rural and isolated communities and provide the much needed social life, new skills and learning opportunities, for any young people aged between 10 and 26 years, with an interest in rural life and activities.  The Covid 19 situation has meant that all planned competitions and events for the coming months are either cancelled or postponed, however Staffordshire YFC is continually adapting to the current situation and thinking of new ways to connect and provide a valuable service to its members.

For any further information about Staffordshire YFC’s Clubs and County during Covid 19, please contact Julia Taylor, County Organiser on 07841 422706 or email organiser@staffsyoungfarmers.org.uk .