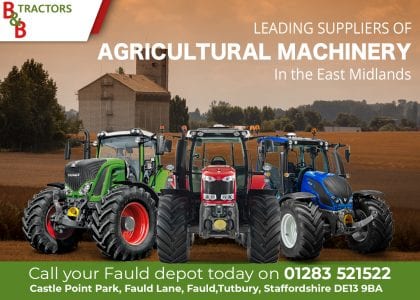 During last two weeks, Staffordshire YFC has delivered the second part of its County Public Speaking Competitions programme to members, using zoom.  The popular competitions, which help to grow young members public speaking skills; effective listening, current affairs knowledge, confidence and communication, were kindly sponsored by B and B Tractors.  Sara Paoloni from B and B Tractors said “We loved being a part the Staffordshire YFC Public Speaking Competitions and are very glad the event was a success for all members involved.”  It was a first for Staffordshire YFC to host these kinds of competitions virtually, but was made easier by the use of zoom breakout rooms and members embracing their video cameras and microphones.

For the younger members of the federation, the Junior Speaking Competition was held, with teams from Eccleshall and Uttoxeter taking the first two placings.  Members aged 10 – 16 years form teams who act as a Chairman, Speaker and Proposer of the Vote of Thanks.  From Eccleshall YFC, Molly Sammons spoke as the main speaker and in Uttoxeter JNFU, Edward Townsend was the main speaker.  Both members chose to share the same topic – A Year in Lockdown, with stories of their experiences with home schooling, setting up a local pop-up shop as well as life on the farm and what they missed the most.  Eccleshall YFC were awarded first place, with Uttoxeter JNFU coming second.

The Intermediate members (aged 17 – 22 years) took part in the Intermediate Brainstrust Competition, where teams consist of a Chairman and a panel of three members.  The Chairman is given six question topics, three of a general knowledge and three on rural affairs, from which they select three for discussion by the team.    A lively debate ensues for 20 minutes, and this year topics included the “British Press and the Royal Family”; “Robotic Farming” and “Virtual GP Appointments for the future”.  After the judge’s deliberations, the results were announced as Uttoxeter JNFU taking first place, Ashley YFC in second place and Eccleshall YFC in third place.

The senior members (aged 22 – 27 years) took part in the Debating Competition and this saw three very lively debates with very topical themes of “The combination of Coronavirus and Brexit gives the UK a once in a lifetime opportunity to become a more equal society”, “Children and young people’s mental health and wellbeing has been neglected by the government during Covid19’ and “With climate change on the agenda and carbon neutral being the buzz words, all livestock farming should be banned”.  After debates which lasted just over 35 minutes per topic, the overall results were Eccleshall B YFC in first place, Eccleshall A YFC in second place and Chase YFC in third place.

The first and second placed teams in these competitions will go forward to represent Staffordshire at the West Midlands Area Finals which are also being hosted by Staffordshire YFC on zoom in April.

The Public Speaking Competitions are a great example of the opportunities which all YFC members can get involved in, to develop their public speaking skills, take up new challenges and meet like-minded young people from across the county.  Whilst Covid-19 has prevented the social interaction and practical competitions from taking place, Staffordshire YFC members have been determined to continue to deliver a programme of youthwork, with adapted competitions and activities to its members.  This Wednesday evening sees Cheadle Young Farmers hosting the Club Night with a talk entitled “The Life of a Staffordshire Vet” for members from across the county to learn more about behind the scenes of farm visits and calf husbandry.

As Staffordshire YFC looks to the future, with the prospect of the lockdown easements over the summer, the federation hopes to be able to plan events to bring together members and rural community together at some of its competitions and social activities, taking into consideration, the latest covid guidance at the time