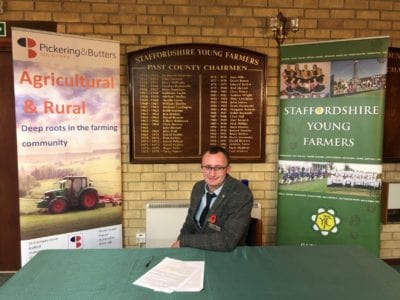 On Friday 6th November, Staffordshire County Federation of Young Farmers Clubs (YFC) held their very first Virtual County AGM with County Chairman, William (Will) Freeman in the Chair, live from the YFC Centre headquarters, using Zoom.   The AGM webinar was kindly supported by Pickering and Butters Solicitors, a firm of Staffordshire Solicitors who were founded over a century ago, with offices based in Stafford and Rugeley.   The County AGM is usually attended by over 250 invited guests and members of the Federation and is the most prestigious meeting of the Staffordshire YFC year.

Despite the restrictions of Covid19, Will Freeman reported on his year as County Chairman, which highlighted his favourite memories and all YFC activities in Staffordshire during the challenging year.  Will played a key role in organising the very first Christmas Tractor run, working with South Staffs Water, in December 2019, just at the start of his year as Chairman.  The event raised over £3800 for charity and was hailed a great success with 85 tractors taking part.  During the first five and a half months of the YFC year, which starts in September, Staffordshire YFC managed to hold 28 live competitions, with a further 8 being held during lockdown, including the very popular Virtual Rally and adaptation of the Stafford County Show, with the YFC Virtual County Show Week.  The week in May coincided with what would have been show week and included an array of competitions including “Shoe Box Floats”, which showcased just how adaptable and creative Staffordshire YFC members can be.    Will, a member of Chase Young Farmers said “With my year coming to an end and national lockdown part two just starting, the plans for our upcoming events have been changed again.   I’m sure everyone can all agree that twelve months ago we would never have imagined how this year has gone.  But I am so proud to report that in true YFC style Staffordshire’s members have adapted wherever possible and embraced the new normal.   Staffordshire YFC shall continue to keep supporting our clubs and members through the coming months.”

It was reported during the meeting that Staffordshire YFC has 461 members aged 10 – 26 years, an expected reduction from the previous year, due to the pandemic which came at a time when many new members would join to actively take part in the Rally, County Show and summer social events.

The meeting did highlight the amazing community work of members across the YFC Clubs and awards were presented in respect of these achievements.  Sarah Hope, Club Secretary 2019-20 of Ashley YFC, set up the Ashley YFC Community Volunteer Service.  They worked alongside North Staffs Hospital, Loggerheads Pharmacy and Ashley Surgery to delivery prescriptions, do shopping, go dog walking and on some occasions and being a source of companionship over the phone, chatting to people who were shielding during lockdown.  They carried out over 200 deliveries and had a great response from their members, who all wanted to get involved and help.  Sarah and her fellow Club Officers had to coordinate the phone calls and ensure that all the requests were met and delivered.  Staffordshire YFC recognised the wonderful efforts of Sarah during the meeting and awarded her the Senior Merit Award, which is presented to an outstanding member at Club or County Level.

The Junior Merit Award was also presented for outstanding efforts made by a young member of Eccleshall YFC.  Molly Sammons, who has been a YFC member for three years, set up a Community Pop Up Shop in her own village of Derrington, to give the vulnerable and elderly residents of the village the independence to continue to do their own shopping during lockdown, whilst avoiding queues and larger supermarkets.

Uttoxeter JNFU were also recognised for their community efforts, as a club.  The raised over £1100 for the Midlands Air Ambulance, through a fundraising raffle at their 90th Dinner Dance prior to lockdown, as well as a virtual Duck Race during lockdown.  Members of the club also delivered supplies and gifts to five local care and nursing homes in the local area, bringing smiles to residents, as they were unable to see family visitors.

Also, during the meeting, Mr Philip Bourne was elected as County President for his second year.  He has been very involved in Stone YFC as two of his daughters were both members of the club, serving on the Clubs Advisory Committee and as their Club President for a number of years.

Mr George Hawley was elected the Senior Deputy President, again for the second year.  George is a former Staffs YFC County Chairman after time as a very active member of Cheadle YFC.  In recent years he has been the President of Cheadle YFC following his very hands-on involvement in the reformation of the Club back in 2017.

The presentations of awards were announced by Will Freeman, after the formalities of the meeting were finished.  The results were as follows, to the Clubs and Individuals:

Most Improved Club – Competitions Cup: Awarded to the Club that has achieved the highest improvement in points for competitions from the previous year.

Mr Ken Unwin MBE Memorial Cup: Awarded to the Club who most improves in Public Speaking, Stock Judging and Carcase Judging from the previous year.

Junior Merit Award: This is presented to the most outstanding junior individual at Club or County level was presented to Molly Sammons of Eccleshall YFC.

The final awards of the evening are the most prestigious to receive and are judged throughout the year as a “Club Efficiency” Competition, which encapsulates all aspects of a YFC Club.  The aim of the competition is to encourage members and Club Officers to work together as an effective team for the benefit of all.  Judges look for all aspects of how the clubs are run and hope to see good club administration and record keeping, strong leadership and governance and active promotion of the clubs through publicity and community engagement.  They also want to see teamwork, ideas and enthusiasm from all club members.  Also taken into account during this unusual year, was how Clubs adapted and embraced the challenges of the year.  From this competition, the following awards were presented:

As can be seen from the above, Staffordshire YFC is an organisation for any young people between the ages of 10 and 26 who would like to learn new skills, take up opportunities not available through mainstream education and to become part of their local community with like-minded young people.  Despite the Covid19 pandemic, Staffordshire YFC has managed to hold many of their social events at the start of the year, organise 36 competitions as a mixture of “actual and virtual” and have increased their social media followings to over 4500 via Facebook.  The new membership year has now started and 8 of the 10 Staffordshire clubs have held their Club AGM and re-elected Club Officers to lead their club for the coming year.   All club officers have been given guidance on running in a COVID-19 secure manner to deliver their important youthwork activities, when lockdown restrictions ease and are continuing to adapt the service they are offering to their members.    Looking to the future, Staffordshire YFC have also just launched their Virtual Christmas Rally, over the weekend of 5th – 6th December.  There are 14 classes to be entered, including “Making a 3D Snowman from any materials” and a Club Christmas Song.  They will also be adapting their County Competitions programme to virtual delivery and in some cases, rescheduling for the new year when it is hoped that face to face youth work can start to be delivered again.

For details on how to join your local club, please contact Julia Taylor, County Organiser on 01785 248645 or email organiser@staffsyoungfarmers.org.uk