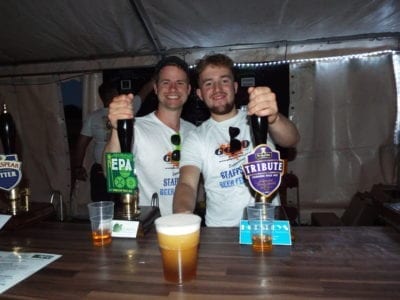 Staffordshire Young Farmers Clubs (YFC) held a very successful Charity Beer Festival outside their YFC Office which is based on the County Showground at Stafford on Saturday 30th June. The Federation were blessed with the run of warm weather and festival goers basked in sunshine as they listened to singers and bands and enjoyed some of the 15 beers and ciders on offer. The event was held to raise money for Young Minds, the leading mental health charity for young people and was the idea of Richard Mottershead, County Chairman of Staffordshire YFC.

The Clubs in Staffordshire YFC have been fundraising for Young Minds since March this year, with a campaign entitled #oatcakeontour! The campaign involves a Giant 4 ft round Oatcake (made from wood), which “toured” around the 11 YFC Clubs in the county. Each club has held a fundraising event, ranging from Quizzes, BBQ’s, a Whist Drive and even taking the Oatcake for a ride on a Steam Engine! Leek YFC raised a grand total of £1200 by holding a Quiz Night back in April along with braving the blazing sunshine on Saturday, and walking 26 miles down to the Beer Festival at Stafford from Leek. With some sore feet, the members were glad to take off their boots and enjoy a chilled beverage.

The final club to host the #oatcakeontour, Stone YFC, went one step further – literally! They met at the County Showground on Saturday morning at 3am, leaving Stafford in a minibus and heading to Wales to tackle Mount Snowdon – complete with the wooden Oatcake which had some customised handles fitted to make the task of taking it to the top a little easier! Again, they braved the warm weather and were grateful of the breeze at the peak. Stone YFC raised £1000 on their mission and were very happy to reach the final destination of the Charity Beer Festival back in Stafford on Saturday evening.

Richard Mottershead, County Chairman said “It was so great to see Staffordshire YFC members of all ages past, present and future come along to support us and Young Minds. We had a fantastic family fun day with a bouncy castle, ice cream, live music and a great selection inside the beer tent, so there was something for everyone. I am so proud to call myself the County Chairman Staffordshire YFC. All the club’s have rallied together to raise money for the #oatcakeontour campaign. It was brilliant to welcome members from all over the country coming to enjoy the music and atmosphere including members from Cornwall, Herefordshire, Lancashire, Cumbria and Wales whilst they were competing at the National Federation of Young Farmers Clubs Competitions Day.”

Championing mental health is one of the campaigns which the National Federation of Young Farmers Clubs encourage YFC counties to do. Their campaign, Rural Plus, provides information and tools to encourage YFC to become a strong support network for rural young people who may experience rural isolation and mental health issues. An evening is available for all clubs to hold, which aims to raise awareness of mental health and rural isolation issues that young people may face living in rural areas and where to turn for support.

Combined with the event on Saturday, Staffordshire Young Farmers have raised over £6500 for Young Minds with their campaign. The money will be presented to Young Minds at the SCFYFC County AGM which is being held on Friday 9th November.

For all the photos from the day, click here