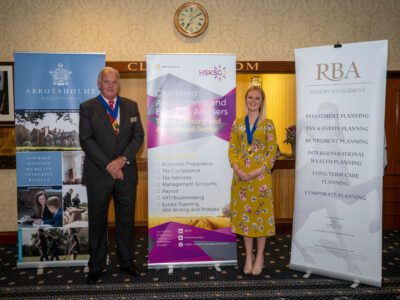 On Tuesday 17th August, Staffordshire Young Farmers Club hosted their Pre-Show Reception which was kindly sponsored by Abbotsholme School, RBA Wealth Management and HSKSG Accountants, in the Ingestre Suite on the County Showground instead of the usual YFC marquee to allow for more guests to attend comfortably.  This was the first social event the federation had held following the last 18 months of challenging times during Covid 19, attended by over 200 sponsors, supporters and invited guests of the Federation and hosted by County Chairlady, Amy Boothby.

This year’s reception theme showcased “The Best of Staffordshire YFC” with winning entries on display from the recent YFC Static Competitions and some clubs delivering presentations about their community work and fundraising which they preserved with during the pandemic.  Ashley YFC set up the Ashley Community Volunteers Service, delivering over 200 prescriptions during the height of last years lock down and members are continuing to offer services to the vulnerable in their local community including lifts to the hospital and a chat on the phone to those who are shielding.   In addition to this, Ashley YFC explained about their fundraising held in December 2020, called “Covid-19 Days of Christmas” where they raised funds for Cardiac Risk in the Young (CRY) by holding a number of virtual events through their social media pages.  On 7th – 8th August, Ashley YFC also arranged a CRY Screening Weekend for YFC members and the local community at Ashley Memorial Hall with over 160 young people checked and 10 referred for further testing.  Ashley YFC presented a cheque to Tom Green from CRY for £657 on the evening which was gratefully received.

Eccleshall YFC have also been busy raising funds within their club, with members taking on the Three Peaks Challenge (climbing Ben Nevis, Scafell Pike and Snowden in 24 hours) on 21st June.  Beth Poynton, one of the members who completed the challenge explained how their adventure went, including times taken to climb each peak.  After a long 24 hours, the club were really pleased to have raised over £685 which will be split between the Club funds and local charity, Terrible Titties and Other Bitties.  The charity, based in Stafford, offers support to local people whose lives have been affected by cancer.

Uttoxeter JNFU (Young Farmers) also undertook a challenge earlier this year.  Their Club Officers, Toby Hall, Kate Mollatt and Eddie Phillips alongside Club President, Francis Mollatt, completed a Sky Dive falling 15’000 feet back in May and raised over £1600.  Funds were split between the club and The Farming Community Network (FCN), a voluntary charity which supports farmers and their families within the rural community.  Club Chairman, Toby Hall explained to guests about the Sky Dive including his own personal experience which he reported as a “once in a lifetime” opportunity.  Toby went on to present the cheque to Peter Hardy, Training and Development Manager for FCN.

As well as the community achievements by members across Staffordshire, there was entertainment for guests with the YFC’s Got Talent Competition, provided by members of Leek YFC with their own version of Shania Twain’s “That Don’t Impress Me Much” and a Two Ronnies Sketch with a YFC twist from Toby Hall and Rob Mollatt, of Uttoxeter JNFU.

Following the YFC’s Got Talent and various presentations, Amy explained to guests about The National Federation of Young Farmers (NFYFC) Achiever Awards, which celebrate rural young people across England and Wales in various categories including Community Supporter of the Year and New YFC Member of the Year.  Last year, Emily Swinnerton, member of Eccleshall YFC came Runner Up in the Rural Entrepreneur of the Year category, with her business launched in February 2020, Preloved Country Clothing, selling brands which have been pre-owned including Jack Wills, Joules and Crew.  Emily’s business is growing from strength to strength with her sales reaching not only UK wide but also international customers and she explained to guests through her presentation about her achievements so far, her passion for sustainability and her ambition to continue to grow the business further, hopefully by opening small shop.

The results of the Leslie T Chester Story Writing Competition (500 words using 15 given words) were announced by judge, Rachel Goldie, NFYFC Chairlady with Kate Oakes of Chase YFC taking 1st place for her story of Fred Pickles, a fictional local contented farmer.  There was also a presentation by Polly Baines, Chairlady of the Staffordshire Young Farmers Ambassadors (YFA) who support members with the YFC Travel Programme, which is seeing a relaunch next year and some new trips being introduced, subject to travel restrictions at the time.

The evening was a great way for members and guests to start thinking ahead to the Staffordshire County Show, which is being held on Wednesday 25th – Thursday 26th August where Staffordshire YFC members will be promoting themselves and their clubs inside the YFC Marquee, erected next to the YFC Building on the showground. Development Chairladies, Beckie Phillips and Hannah Britland delivered a very witty poem explaining what activities will be taking place for YFC.    Members will also be competitive on Wednesday evening as they “take the strain” in the main ring at 7.30pm with the Male and Female Tug of War Competition as well as on Thursday afternoon at 2.15pm with the very popular Show Floats, to the theme of “80’s Films” this year.

Amy Boothby, County Chairlady said “Last year, we were all saddened to learn that the County Show would not go ahead.  I think the best of this YFC year is yet to come next week and hope that everyone is able to come and visit us inside the YFC Marquee for some light refreshments and much needed catching up.”

The evening closed with a buffet provided by the Staffordshire YFC Catering Committee, along with some much-needed socialising with guests, some of whom had not met up for over 2 years since the last Pre Show Reception.

Photographs from the evening were taken courtesy of Photographer Ian Barstow, @DraycottPhotography from Rocester Camera Club to view click here.