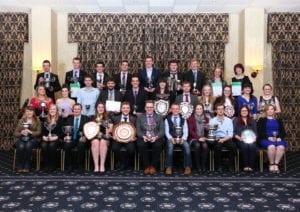 On Friday 10th November, Staffordshire County Federation of Young Farmers Clubs (YFC) held their County AGM in the Ingestre Suite, County Showground, Stafford.   George Goodwin, County Chairman, gave his Chairman’s report on last year of activities.  George, a member of Ridware Young Farmers said “One of my aims at the start of the year was to do as much as possible at every level of YFC, easier said than done with 10 active clubs, area meetings and competition’s, then National meetings, events and competitions. Hopefully, you’ll agree I have served you well, at times it has been the best feeling in the world, sometimes been hard work but you have to take the rough with the smooth!”  George went on to report on a very successful year, highlighting key moments in the busy YFC calendar and finishing by thanking the membership for electing him to the position, which he has thoroughly enjoyed.

It was reported during the meeting that Staffordshire YFC has 665 members aged 10 – 26 years.  The members have benefited from taking part in some amazing charity work and playing an active part in their local communities.  From Eccleshall YFC who held their annual “Speed Shear” to Lichfield YFC who held a Charity Tractor Run raising funds for the Teenage Cancer Trust.  These are just two examples of the many ways in which the eleven clubs in Staffordshire, all of whom are charities themselves, take time and plan events in order to raise funds for other charities across the Country.  In total this year, the Clubs in Staffordshire have raised over £5,500 for worthwhile causes.

David Heminsley was elected as County President for his second year. David, a past member of Uttoxeter JNFU since 1988, is a very active volunteer in the Federation, and currently updates the County Website, leads in all things “Health and Safety” and regularly helps with the upkeep and maintenance at the County Office.  He is a past Club Chairman of Uttoxeter, past County Chairman and more recently, was the Club President of Uttoxeter JNFU.  David works for JCB as a trainer.

Chris Hall, a Dairy, Sheep and Beef farmer from Croxden was elected the Senior Deputy President, for his second year.  Chris is a past member of Dove Valley YFC and Uttoxeter JNFU and has held the positions of Club Chairman and Club President for both clubs.  He was also the County Chairman of the Federation in 1988 and is currently a Governor at Abbotsholme School.

The presentations of awards were made by Mr Mike Heenan, Staffordshire & Birmingham Agricultural Society President, to the following Clubs and Individuals:

Most Improved Club – Competitions Cup: Awarded to the Club that has achieved the highest improvement in points for competitions from the 2015/2016 year

Mr & Mrs W.A. Taylor Merit Award: Awarded to the most outstanding individual at Club or County level was presented Harriet Wilson of Eccleshall YFC.  Harriet has worked extremely hard within her Club helping to organise their 60th Anniversary Dinner and also co-ordinating their Annual Speed Shear.

Junior Merit Award: This is presented to the most outstanding junior individual at Club or County level was presented to Meg Barnes, Leek YFC.  Meg has continually supported her club by taking part in lots of Competition as well as organising the teams, including public speaking, YFC’s Got Talent and Junior Tug of War and encouraging other members to take part.  Meg has produced a brilliant scrapbook for the year and sang her heart out at the recent Queens Award celebrations.  At only 15 years of age last year, the federation hopes that Meg will undertake other YFC roles in the futures.

Trophy for the Most Embarrassing Moment: Winner: Harri Dunne, Lichfield YFC for his antics at a friend’s 21st birthday party.

Junior Stockjudging Cup: The winning club was Leek YFC and the runners-up were Lichfield YFC.

Intermediate Stockjudging Cup: The winners were Leek YFC and runner-up was Uttoxeter JNFU.

Overall Stockjudging Cup: The winner was Leek YFC and the runner-up was Uttoxeter JNFU.

Oxford Farming Conference: The Staffordshire & Birmingham Agricultural Society kindly sponsor two places for the Conference held in January 201, and following applications made by members, describing in no more than 500 words, why they should be chosen to attend.  The two members awarded the places were:  Matthew Lane of Lichfield YFC and Will Gallimore of Uttoxeter JNFU.