Staffordshire County Federation of Young Farmers Clubs (SCFYFC) celebrated in style on Saturday 7th October in The Ingestre Suite on the County Showground in Stafford as over 475 invited guests, members and supporters of SCFYFC came together to see The Presentation of The Queens Award for Voluntary Service (The MBE for Volunteer Groups.)  This prestigious award was presented on the evening by HM Lord Lieutenant, Mr Ian Dudson CBE KStJ, who in attendance with his wife, Mrs Jane Dudson, enjoyed an evening of entertainment from past and current YFC members as they put on a show entitled “What has Staffordshire YFC ever done for us?” 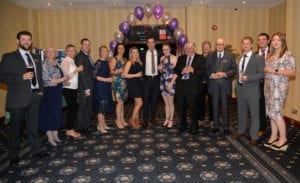 The entertainment en-capsulated exactly what opportunities and activities Staffordshire YFC has and does on a regular basis.  From Competitions, the County Show, the Annual Rally, YFC Travel Programme, Training, Meetings to the endless Social Events for members to get involved in.  The cast produced a remix of “500 miles” by The Proclaimers, various comedy sketches, past and current YFC Travellers explaining just how far around the world they had all been and  a practical Live Stockjudging Lesson including a surprise demonstration on a heifer, which was halter-led into the Ingestre Suite (closely followed by a bucket and shovel!)  Guests were wowed by the array of scenes which led flawlessly from one aspect of YFC to another, with plenty of laughter and smiles along the way. 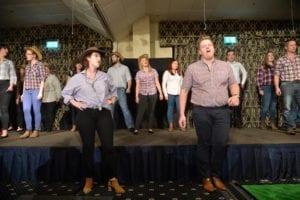 Following the entertainment, it was time for Mr Ian Dudson to present the award.  He explained that since the award was first given in 2002, following The Queens Golden Jubilee, Staffordshire as a county has received over 70 of the awards, reflecting the hard work and quantity of volunteering that takes place in the area.  He then congratulated Staffordshire YFC on winning the award and went onto thank the members for the entertainment which showed a great array of talents worthy of a separate award and that the sketches gave all guests a really great insight into what Staffordshire YFC is all about. 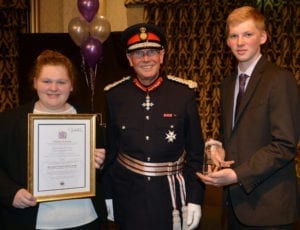 Collecting the award on behalf of Staffordshire YFC were Peter Cotton of Waterhouses YFC who came 1st in both Staffordshire and West Midlands Area YFC Member of the Year Competition (17 years and under) in 2017 and Beth Robinson of Lichfield YFC who was the Runner Up of the same competition in Staffordshire.  Mr Dudson then presented a representative from each of the eleven YFC Clubs in Staffordshire with a Certificate of Appreciation, acknowledging the hard work and commitment of their members and supporters, which has contributed towards The Queens Award. 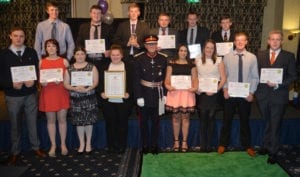 As a surprise on the evening, Staffordshire YFC also paid special tribute to its five County Trustees, Mr Jon Sarsfield, Mr David Beswick, Miss Margaret Bennett, Mr David Heminsley and Mrs Ange Woodward.  The County Chairman, Mr George Goodwin outlined the hard work that each County Trustee had given over the years to the county federation and explained that this, combined with endless enthusiasm has led to this recognition.  He said “Our five trustees don’t just fulfil a list of jobs and positions that we could “tick off”. They do so much more than that.  They go the extra mile, and then an extra ten on top of that. They have enthusiasm for all things “Staffordshire YFC”.   They don’t just give time; they give it some welly, like no other!”  Each County Trustee was presented with a Queens Award Pin Badge by Mr Dudson.

The evening was concluded with a magnificent hot buffet provided by Pear Tree Catering and plenty of socialising as members past and present, along with all guests enjoyed the great atmosphere created by such a wonderful evening.  Katie James, longstanding member and Club Leader of Leek YFC said  “I don’t think anyone left the showground on Saturday night without having a proud sense of belonging to Staffordshire YFC” which summarised the whole event perfectly.