Staffordshire YFC were victorious in the NFYFC Live and Carcase Judging Competitions at the 2015 English Winter Fair. The team of Katie James, Peter James, Aimee Smith and Will Leese took home the top prize.

In addition to the NFYFC Competition, the English Winter Fair YFC classes were also held as a one day competition on Sunday. This was organised by Staffordshire YFC and is kindly supported by The English Beef and Lamb Executive as well as the Staffordshire and Birmingham Agricultural Society. One of two Leicestershire teams went away with first place in this competition.

The weekend has been a great success with young farmers across the country coming together to compete in these important competitions which develops members skills in Stockjudging and public speaking. 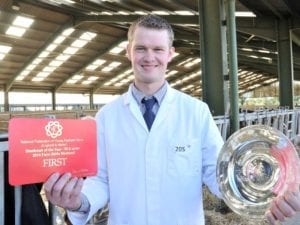 Young Farmers’ Club members put their talents to the test in an enthralling NFYFC Farm Skills Weekend across Shropshire and Staffordshire. 24-year old Peter James from Leek YFC took home the coveted NFYFC Stockman of the Year award for the seconfd year running, a feat which has never been done before.

Staffordshire members get set to see the world! 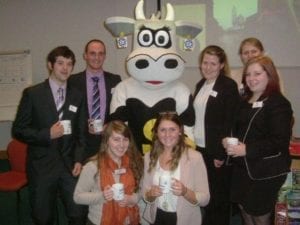