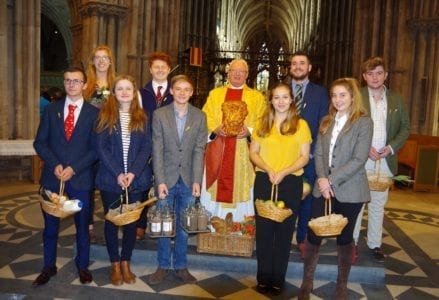 On Sunday 6th October, Staffordshire Federation of Young Farmers Clubs (YFC) were very proud to be a part of the Harvest Thanksgiving Service at Lichfield Cathedral, along with Staffordshire National Farmers Union (NFU).   As the Staffordshire NFU are celebrating their centenary year this year, both organisations decided to join together, to give thanks with the congregation at the Cathedral for all that is involved in the production of food and drink.   Members of YFC and the NFU presented Harvest Offerings and gave readings, with themed baskets including “The Offering of Animal Produce” and “Gifts of Resourcefulness” as part of the service.

The County Chairman of Staffordshire YFC, Polly Baines, along with Richard Bower, County Chairman of Staffordshire NFU, also led the Prayers of Intercession during the service.  Displayed outside the Cathedral housed under the Staffordshire NFU Discovery Pod and in keeping with the rural theme, the Robinson Family of Oxclose Farm, Lichfield brought along some young calves and the Bower Family of Lower Drayton Farm, Penkridge brought along a lamb and a couple of goats.  These were very well received, especially by the Sunday School children.    Also, on display, there was a vintage Massey Ferguson tractor supplied by the Gray Family of Whittington alongside a brand-new Massey Ferguson tractor from B and B Tractors of Fauld.

After the service, all the congregation enjoyed refreshments including locally baked cakes and savouries, served and supplied by Staffordshire NFU and Staffordshire YFC, showcasing what wonderful produce can be eaten and enjoyed within the county.

Staffordshire YFC have been filling social media with the good news of the work that their ten clubs and over 600 members aged 10-26 years across the County do this week, as it has been National Young Farmers Week, a country wide campaign raising the profile of the organisation.  Members have been sharing about how being in YFC has helped them including Emily Cartmail, aged 22 of Eccleshall YFC said “I would not be in the career I am today with the skills and confidence I have gained through being in YFC.”

Participation in events such as the Harvest Service at Lichfield helps Staffordshire YFC members to build their confidence through public speaking, also meeting new people and having new experiences.

To view a full gallery of photos from this event, please click here