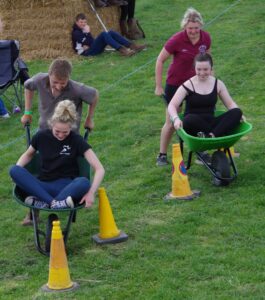 Staffordshire County Federation of Young Farmers Clubs (SCFYFC) County Rally was held on Saturday, 7th May at Hall Farm, Pipe Ridware by kind permission of RJ Smith & Son.  After a two year gap it was fantastic to see ten strong Staffordshire YFC Clubs compete against each other on the day in over 40 competition classes.  The Rally Day started and finished with bright sunshine and saw a great turnout of over 350 members along with sponsors and supporters to cheer on their Clubs in the various competitions.  Members have been preparing weeks ahead to enter the Static Classes ranging from making “Royal Picnic Basket,” creating a Tombola Drum, sculpting a Recycled Garden Feature and four photography categories.  In addition to the displayed classes there were many opportunities for members to compete in active competitions on the day including a Water Catching Challenge, “Build a Tent” Competition and competing in the all-time favourite ‘Total Wipeout’ in order to try and win some silverware at the end of the Day.

The main ring held a huge “Total Wipeout” Competition with teams of up to 6 members from each club taking part.  This was a great success, with members loving the assault course of various challenges including carrying a Custard Cup to the other side of the main ring intact whilst having water and inflatables launched at them! All the main ring fun involved lots of water and enthusiasm from members with overall winners of the Sports Cup from this competition along with the Top Table Royal Relay being Eccleshall YFC.

Into the evening the highly competitive Junior Tug Of War competition, which is also a National Competition for 2022 sees the highest two place teams go forward to the West Midlands Area round in June.   Members aged between 12 and 17 years from Waterhouses YFC took 1st place with Cheadle YFC coming a close second.  The day was rounded off by the ever-popular Mixed Tug of War competition, which saw 9 teams taking part, and Waterhouses YFC, taking the silverware for the day, beating Uttoxeter JNFU in the final.

Following the Tug of War Competitions, during which a hog roast kindly donated by Packington Pork was served, the day was rounded off with announcement of the results from all the Rally Competitions and presentation of Trophies and Awards by the host, Mr Colin Smith. To view the full set of results please click https://staffsyoungfarmers.org.uk/rally-2022-results/

The day was kindly sponsored by over 60 local companies and supporting organisations, with the main sponsors being Shires Vets, Malcolm Harrison and Johnsons of Cheadle.  The Rally day brings together the rural community of Staffordshire and could not run so well without the support of the judges, stewards and catering committee.  Over 100 volunteers behind the scenes ensure that the day runs so smoothly – made up of county officers, vice parents and members of Staffordshire YFC.

Toby Hall, County Chairman of Staffordshire YFC said “I am really proud of all our members, some of whom have never been to a Rally before and so they just didn’t know what to expect.  Their enthusiasm and talents on the day were well and truly on display.  Staffordshire YFC is so grateful for all the support given by the sponsors, parents, members and helpers – we just couldn’t hold this kind of event without them!”

The federation currently has over 650 members aged 10 – 28 years, which is higher than pre pandemic times.  Clubs across Staffordshire are now busy preparing for the Staffordshire County Show being held 1st – 2nd June which is their main marketing event of the year.  The YFC Marquee which is erected next to the YFC Office on the Showground will be themed as “70 yrs of Staffordshire YFC”.  Competitions held in the Main Ring over the two days include the Male and Female Tug of War Finals and the very popular Show Floats Competition which this year is themed as “West End Musicals.”

To view photos from the Rally please click as below: