Staffordshire Young Farmers Clubs (YFC) had a very proud moment whilst in Blackpool at the National Federation of Young Farmers Club (NFYFC) Annual Convention Weekend, when they saw Mr David Heminsley, their Current County President elected as a life Vice President of the National Federation during the AGM on Sunday 6th May. David has been involved in Staffordshire YFC since 1987 after completing his degree in Agriculture at Reading University. He has held the positions of Club Chairman for Uttoxeter Young Farmers Club followed by County Chairman for Staffordshire and also Chairman of the West Midlands Area of YFC as well as President of each organisation as well. David has worked for JCB fo 20 years and is currently a Technical Specialist on the Fastrac high-speed tractor range. 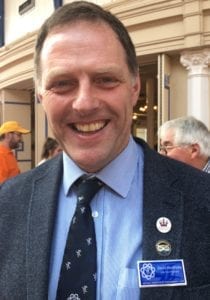 His involvement in YFC at all levels is vast, with his speciality at a County level being all things technical, maintenance and Health and Safety. David is also the first person called for the County Office computer system, which he maintains along with the website. He has judged and stewarded many competitions around Clubs, County, Area and National level and is someone who is often unseen, as he is usually very busy in the background with setting up the varied activities which YFC run.

David Beswick, Senior Trustee to Staffordshire YFC said “I’m really thrilled that David has been awarded as a Life Vice President of NFYFC. He is a great person and his knowledge and expertise has been valuable to the federation, clubs and County. The recognition is a credit to him and all his associates.”

David Heminsley said “I feel very honoured to be made a Life Vice President of NFYFC. I owe a lot of gratitude to all those who have helped, supported, worked with me as part of my journey through YFC over the years. As with so many other past members, it all started when I joined Uttoxeter club, and I was so pleased and proud that current members of the club joined me at the presentation.” 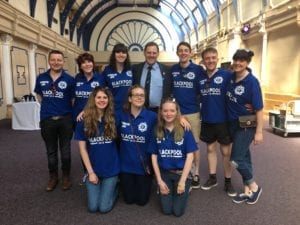 David was proposed, along with Mr and Mrs Poul Christenson of Oxfordshire YFC and Mr and Mrs Ben Westwood of Derbyshire YFC at the National AGM by Kate Wainwright of Derbyshire YFC, with George Goodwin of Staffordshire YFC seconding the motion. George, a member and last years’ County Chairman of Staffordshire YFC, and currently the NFYFC Personal Development Chairman said “Always the first to arrive, last to leave but often working behind the scenes whether that is a Uttoxeter JNFU production, county, area or national event Dave makes it his business to ensure that it is well ran, with the right equipment wired up to the right box!”