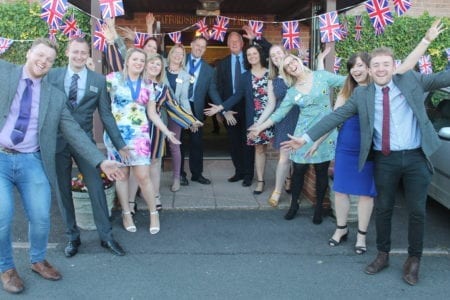 On Tuesday 28th May, Staffordshire Young Farmers Club hosted their Pre-Show Reception which was kindly sponsored by Abbotsholme School, Rocester and Stafford Land Rover at the YFC Office on the County Showground. The evening was attended by sponsors, supporters and invited guests of the Federation and sees the start of the Staffordshire County Show kicked off in style for many!

The evening proved to be very entertaining with the ‘YFC’s Got Talent’ Competition, where competitors presented any talents of their choice from singing to comedy. The judges, George Hawley & Graham Hollinshead commented that the six acts they had judged were all very entertaining and unique in their own way!

After the acts had performed, the winners were announced as Uttoxeter JNFU with Toby Hall and Rob Mollatt. Toby and Rob gave the audience plenty of laughs with their comedy duo act. In second place Leek YFC entertained everyone with their diverse Abba Tribute Act, complete with a flavour of The Full Monty, and of course, with a farming spin! Taking third place was Eccleshall YFC’s comedy act which consisted of a group of members looking to attract Dan Moseley via their version of “Eccy Tinder!”

The Club Display Competition was also held during the evening. Members created a display promoting their club in a space no larger than 1m2. The judges, Dewi Parry, NFYFC Vice Chairman and Tracey Chamberlain said “We were impressed with how well the clubs promoted themselves in a compact space and are really pleased to have been asked to judge this competition.” The final results were, 1st place Eccleshall YFC, with Leek YFC 2nd and in 3rd place were Ashley YFC.

Various cheques were also presented to members who had been successful in gaining a place on the NFYFC YFC Travel Programme. Staffordshire Young Farmers Ambassadors give help and support to all those applying on the programme and this year cheques were presented to Amy Nicholls (Ashley YFC), Sam Fowell (Eccleshall YFC) and Mike Grigg (Stone YFC) who are travelling to Costa Rica and Lizzy Chapman (Ashley YFC) who is going to Austria. Last year’s travellers were also invited on stage to talk about their experiences including Grace Gibbs of Waterhouses YFC who has spent three months on the C Alma Baker Trip to New Zealand.

The evening was a great start to this year’s Staffordshire County Show and gave everyone and opportunity to relax and enjoy a really varied night of entertainment. The purpose of the evening is for Staffordshire YFC to thank all those who support the Federation so well with sponsorship, hosting events, stewarding and giving in their time to volunteer for the charity.