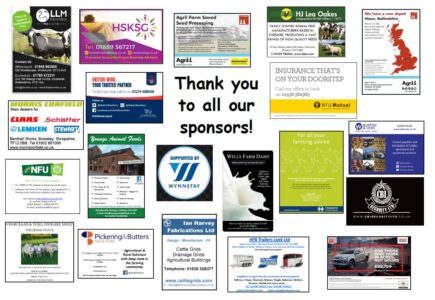 Staffordshire YFC were very disappointed not hold their Rally in May this year and even more so when Leek Show was cancelled, as they had planned to have a very busy marquee displaying lots of competition entries from members across the county and were looking forward to supporting this local traditional show.     However, YFC members are not afraid to be adaptable, especially after the past year and so the Competitions Committee quickly decided that the “competitions must go on!”  Static Competition classes due to be held at the Rally/Show have now been moved and will be pre-judged after 9th August at the YFC Centre with results on display at their Pre-Show Reception on 17th August and then inside the YFC Marquee at the County Show at the end of August.

Having fun, learning new skills and getting stuck into new opportunities is what being a member of Staffordshire YFC is all about and the last few weeks are starting to see the return of all these activities and more.  On Sunday 25th July YFC members took part in a County Go Karting Competition at Midlands Karting, Lichfield with eight teams entered.  Fastest behind the wheel on the day were Eccleshall YFC, closely followed by Cheadle YFC and in third place it was local club, Lichfield YFC.  Later that day, the county had also organised a Car Treasure Hunt starting and finishing at The New Broom, Checkley.  Twelve cars enjoyed an evening of seeking the answers to the clues and finding items along the way including a nettle, spiders web and picture of Winston Churchill! The winners on the day were the Wilson family from Gayton, closely followed by a trio of members from Cheadle YFC.

Looking ahead to August, as well as the County Show Competitions, the Competitions Committee are also organising a Floral Art Competition which is being held on Sunday 22nd August, where skilled members will be creating displays to the NFYFC Competition themes of “My Favourite Sport” for the Juniors, “My Sporting Hero” for the Intermediates and “Sporting Pursuits” for the Senior age category.    Winning displays will be shown inside the YFC Marquee at the County Show.

To get involved in Staffordshire YFC and to become a member, if you are aged between  10 – 28 years (the age range increases to 28 years from 1st September 2021), please contact Julia Taylor, County Organiser on 01785 248645 or email organiser@staffsyoungfarmers.org.uk for more information.  Staffordshire YFC organises a programme of competitions and events for all ages and abilities throughout the year.  All elements of YFC incorporate teambuilding, boosting confidence, leadership and fun and all you need to become a member of this organisation is a willingness to get involved, learn new things and enthusiasm!