Staffordshire Young Farmers Clubs (YFC) are pleased to announce that their varied and active programme of competitions available to all members is being further supported by HSKS Greenhalgh Chartered Accountants and Business Advisers, who have an office in Uttoxeter and are sponsoring the Competition Certificates for two years from 1st September.

Staffordshire YFC has organised and ran 20 separate competitions across the county already since January this year, with the Annual Raft Race concluding the year 2018/19 to see who will be crowned the winning club of the Overall Competitions Cup at the Annual General Meeting in November.  When the new membership year for Staffordshire YFC starts again on 1st September, there will be a further 19 competitions held up until December.  In addition to this, the federation organises an Annual Rally in May which has a further 40 competitions all held on one day!

As Hannah Bain, Associate Director at HSKS Greenhalgh explains, the firm are delighted to be supporting Staffordshire Young Farmers.  Says Hannah: “Having been a member of Young Farmers myself, and a previous competition winner, I have experienced first-hand the important role that Young Farmers plays in the local community.  It not only provides an opportunity for young people to socialise, but to also learn new skills, whether these be just for fun or with a view to future employment opportunities.  As a firm we already support the farming and agricultural community by providing tax, accounting and business advice to many local businesses, and we feel that this sponsorship is a great way of extending that support to include the next generation”.

Polly Baines, County Chairman of Staffordshire YFC said “As a charitable organisation we are reliant on sponsorship and donations in order to continue to provide the great service and opportunities to our members. Therefore, we really appreciate companies like HSKS Greenhalgh Chartered Accountants, who have chosen to support Staffordshire YFC, and the future generation of the rural community in this way.”

Being a member of Staffordshire YFC can offer anyone aged 10 – 26 years the opportunity to take part in such a variety of competitions including Public Speaking, Stockjudging, Go Karting, Raft Racing, Tug of War, Floral Art, Sports and back again for the fourth year running this November, even Cheerleading!  Some of these will lead to members going head to head with fellow members from across the West Midlands Area of YFC’s and in some cases, even reaching the National Finals.  Eccleshall Young Farmers are one club who are no stranger to National finals and on the weekend of Saturday 6th July, some of their members along with members of Uttoxeter JNFU are competing in the National Show Choir Competition.  In addition to this, Waterhouses YFC have just taken part in the West Midlands Area round of the Male Tug of War Competition at The Three Counties Show, defending their winning title from last year and will now go head to head and compete with the countries strongest teams at the National Finals which are held on Saturday 3rd August at Tenbury Show in Worcestershire. 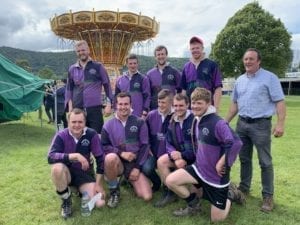