Jubilee Beacon lit at the end of the County Show 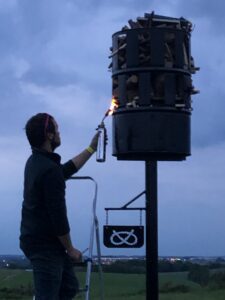 Staffordshire YFC finished a very active couple of days at the Staffordshire County Show, by marking the occasion of the Platinum Jubilee Celebrations, with the lighting of a beacon, as HM The Queen is the Patron of The National Federation of Young Farmers Clubs (NFYFC.)  The federation chose to light two beacons, which had been made by members at the Annual Rally held earlier in May.  Held at the top of the main car park of the County Showground,  the first place beacon, made by Steven Torr of Waterhouses YFC was lit by County President George Hawley, closely followed by the second placed beacon, made by Ed Foster Johnson of Lichfield YFC.  Ed lit his beacon, which also displayed the Staffordshire knot as part of the design.

Around 50 members and supporters of Staffordshire YFC enjoyed a very relaxing social atmosphere along with numerous boxes of pizza as the beacons flickered away whilst the sun went down on what had been one of the busiest County Show days ever seen.

Thanks must go to the Staffordshire and Birmingham Agricultural Society for allowing Staffordshire YFC to hold this evening on the showground site.