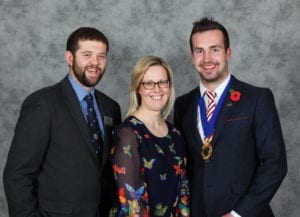 Staffordshire Young Farmers made history at the County AGM held on Friday 10th November, when they elected Mrs Julia Taylor, currently the County Organiser to the Federation, as an Honorary Life Member of the Federation.  Julia, who has worked for Staffordshire YFC for 14 years, was overwhelmed back in September at the County Executive Meeting when the organisation decided to bestow this honour upon her.   The decision to award this position is a first, there is no other Honorary Life Member in Staffordshire YFC, and it was awarded in recognition of Julia’s hard work, commitment and unique input into the Federation.  Jon Sarsfield, County Trustee said “We believe it is right and proper to say a big thank you to Julia for the way in which she has carried out her role over the many years.”

At the County AGM, George Goodwin, County Chairman proposed the motion that “In recognition of her enduring commitment to the development of Staffordshire County Federation of Young Farmers Clubs and the well being of its members, Mrs Julia Taylor be elected an Honorary Life Member of the Federation with immediate effect.”

This was seconded by Richard Mottershead, currently the Vice County Chairman who said “Julia makes the role of County Organiser look easy, she knows venues, judges, stewards, everything and anything to complete the YFC calendar.  And she does it with a lot of enthusiasm!”

Julia, a former member of Cheadle YFC, gave an emotional thank you to the members and supporters of the federation for the humbling honour and described how being the County Organiser of Staffordshire Young Farmers is a “dream job” for her.  She said “I cannot imagine life without StaffordshireYFC in it and now, I will never have to!”