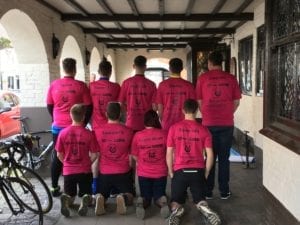 Supported by fellow Eccleshall YFC members Richard Owen and Emily Cartmail and their trusty van, filled with energy snacks, puncture repair kits and hydrating drinks, the 7 members, Will Massie, Tom Westwell, Jack Owen, Harry Bowers, Tom Bowers, Sam Fowell and Nathan Sillito kept up the pace with each other and managed to complete 70 miles on the first day with the last 10 miles being quite gruelling. After a brief overnight stop near to Chorley, the final 30 miles went very straightforward, and the cheer from members from around the country as they arrived at the Winter Gardens was fantastic.

The total raised on the bike ride for Dan has now exceeded £7000 which will help greatly towards his rehabilitation.

The Club had an action packed weekend, with little rest for Tom Westwell and Will Massie, who were 2 members of the Eccleshall YFC Jump Rope team, competing in the National Finals of this Competition on Sunday afternoon. Alongside team members Sally Tyler and Sammie Wilson, this awesome foursome pulled off an extremely technical routine. Their tricks with the ropes had the audience on the edge of their seat. Tom, had only started practising for this competition since February, following Dan’s accident, as Dan was one of the original team due to compete. The Club were determined to make Dan proud, and he even had his own cheer from the crowd as the competition was streamed to him via FaceTime on the day. After a very energetic performance, the team were awarded 2nd place, only 4 points behind current champions Gloucestershire YFC.

Will Massie, team member said “It has been great to see how the Club has all pulled together since Dan’s accident, working so hard in training for the bike ride and then also practising for the Jump Rope Competition. We are all willing for Dan to be back at Eccleshall YFC soon.”

Julia Taylor, County Organiser for Staffordshire YFC said “Watching the Eccleshall YFC team working together so well this weekend has made everyone in the county very proud. We look forward to seeing Dan back in Staffordshire YFC and with such brilliant and supportive friends combined with his determined and positive attitude; we have no doubt that this happen.”

The next fundraising event to help Dan is being organised at the Staffordshire YFC County Office on the County Showground in Stafford on Sunday 24th June from 10am-12noon when a “Brunch for Dan” will be served to friends, family, YFC members and supporters. Everyone is welcome to join in this event. 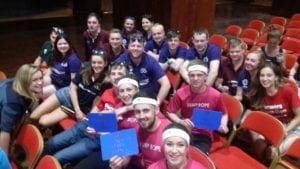