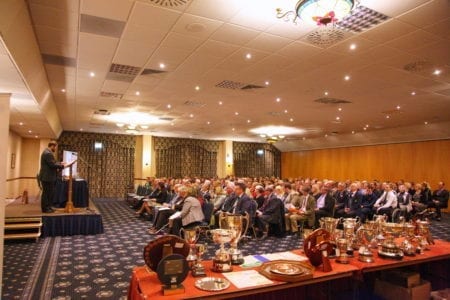 On Friday 9th November, Staffordshire County Federation of Young Farmers Clubs (YFC) held their County AGM in the Ingestre Suite, County Showground, Stafford. The evening was kindly supported by Pickering and Butters Solicitors, a firm of Staffordshire Solicitors who were founded over a century ago, with offices based in Stafford and Rugeley. The County AGM was attended by over 250 invited guests and members of the Federation and is the most prestigious meeting of the Staffordshire YFC year.

Richard Mottershead, gave his County Chairman’s report on last year of activities. Richard, a member of Ashley Young Farmers said “It has been an absolute honour to have been the Staffordshire YFC County Chairman over the past twelve months. I don’t think I’ve paused or had a night off since being elected but I have loved every minute of it. Even before I began my year, I knew I had two things I wanted to achieve. The first was to hold a large charity campaign that involved the whole county; the second was simply to enjoy the year, getting along with as many members as possible in as many clubs as possible. Standing here now, I would like to thank each and every one of you for both getting behind the Oatcake on Tour campaign for Young Minds, and for making me feel so welcome at everything I was able to attend. Because of that, I am thrilled to say, I achieved my aims, and I couldn’t be prouder of the year we have had together.” During Richard’s reported, he presented a cheque for £307 to The Farming Community Network following monies raised during the recently held Harvest Festival Service and then went on to announce that the final total raised for Young Minds from the Oatcake on Tour was £7120.

It was reported during the meeting that Staffordshire YFC has 680 members aged 10 – 26 years. The members have benefited from taking part in some amazing charity work and playing an active part in their local communities. From Eccleshall YFC raising over £11,000 for the Dan Moseley Rehabilitation Fund to Leek YFC walking 26 miles in 28-degree heat raising money for ‘Young Minds’. These are just two examples of the many ways in which the eleven clubs in Staffordshire, all of whom are charities themselves, take time and plan events in order to raise funds for other charities across the Country. In total this year, the Clubs in Staffordshire have raised over £34,000 for worthwhile causes.

David Heminsley was elected as County President for the third year. David, a past member of Uttoxeter JNFU since 1988, is a very active volunteer in the Federation, he leads in all things “Health and Safety” and regularly helps with the upkeep and maintenance at the County Office. He is a past Club Chairman of Uttoxeter, past County Chairman and more recently, was the Club President of Uttoxeter JNFU. David works for JCB as a trainer. David said “I am proud to be re-elected for the coming year and look forward to seeing what is in store for Staffordshire YFC.”

Philip Bourne was elected the Senior Deputy President. Philip originates from Newcastle Under Lyme, became involved in Stone YFC when two of his daughters joined the club. He has served on the advisory committee supporting Stone YFC and is currently serving as their Club President. Philip is now retired after a career in Electro Mechanical Engineering! Philip said “I am very much looking forward to this role, and it is an honour to have been asked.”

The presentations of awards were made by Mr Peter Stone, Staffordshire & Birmingham Agricultural Society Chairman, to the following Clubs and Individuals:
Most Outstanding County Officer: Becky Fowell, Development Chairman
David Palij Award: Awarded to the Club that has done the most for charity/community work during the last 12 months
Joint Winners: Eccleshall YFC, Leek YFC & Stone YFC; Joint Runners up – Eccleshall YFC & Uttoxeter JNFU
Manifold Marketing Award: Awarded to the Club who best promotes their Club and engagement in Club, County & Community Events.
Winner: Stone YFC, Runner-up: Cheadle YFC
Scrapbook Award: Awarded to the Club who produces the most interesting and unique scrapbook based on the activities of their own Club over the past membership year.
Winner: Stone YFC, Runner Up: Ashley YFC
Most Improved Club – Competitions Cup: Awarded to the Club that has achieved the highest improvement in points for competitions from the 2016/2017 year
Winner: Stone YFC; Runner Up: Chase YFC
Small Clubs Trophy: Awarded to one of the five smallest Clubs in the County with regard to membership, that has achieved the most points throughout the year for competitions.
Winner: Chase YFC; Runner Up: Lichfield YFC
Mr Ken Unwin MBE Memorial Cup: Awarded to the Club who most improves in Public Speaking, Stock Judging, Carcase Judging and Tug of War.
Winner: Lichfield YFC; Runner Up: Stone YFC
Overall Competitions Cup: Presented to the club with the most points for the Competitions that have been held for the last 12 months:
Winner: Uttoxeter JNFU; Runner Up: Eccleshall YFC
W.H.D. Hobson Cup: Awarded to the Club with the highest increase in membership.
Winner: Stone YFC, Runner Up: Ashley YFC
Newsletter Shield: For the best contribution to the Young Farmers’ Book of the Year
Winner: Leek YFC; Runner Up – Cheadle YFC
Mr & Mrs W.A. Taylor Merit Award: Awarded to the most outstanding individual at Club or County level was presented Natalie Roe of Stone. Natalie has worked extremely hard within her own club, consistently supporting the top table in their role as a Club Leader. She has attended just about every club night, encouraged and helped all members to get involved and have got stuck in themselves. County President, David Heminsley said “Natalie is an asset to their club and a great example to new members of what being a YFC member is all about.”

Junior Merit Award: This is presented to the most outstanding junior individual at Club or County level was presented to Lucy Clayton of Uttoxeter JNFU. Lucy is an enthusiastic, cheerful and dedicated young member who has taken part in absolutely everything in their first year in the club. Club Chairman 17/18 of Uttoxeter JNFU, Emily Philips described Lucy as “personification of what a Young Farmer should be.”

Oxford Farming Conference: The Staffordshire & Birmingham Agricultural Society kindly sponsor two places for the Conference held in January 2019, and following applications made by members, describing in no more than 500 words, why they should be chosen to attend. The two members awarded the places were: Annie Bradshaw of Eccleshall YFC and Robert Mollatt of Uttoxeter JNFU.

The final awards of the evening are the most prestigious to receive and are judged throughout the year as a “Club Efficiency” Competition, which encapsulates all aspects of a YFC Club. The aim of the competition is to encourage members and Club Officers to work together as an effective team for the benefit of all. Judges look for all aspects of how the clubs are run and hope to see good club administration and record keeping, strong leadership and governance and active promotion of the clubs through publicity and community engagement. They also want to see teamwork, ideas and enthusiasm from all club members. From this competition, the following awards were presented:

David Heminsley, County President said “Congratulations to Cheadle YFC, in their first year have wowed the judges with their enthusiasm, getting to grip with how a YFC club should run, work as a team and take a full part in YFC life and all that it offers. This club will be a force to be reckoned with for many years to come.”

As can be seen from the above young people between the ages of 10 and 26, experience fun and excitement, whilst enjoying competitions, discos, sports, travel, meeting new friends and learning new and different skills. If you are interested in joining them please contact Julia Taylor, County Organiser on 01785 248645 or email countyoffice@staffsyoungfarmers.org.uk for more information and details of your nearest Club.

Full photos from the evening can be found here