Amy ready for her year in the Chair! 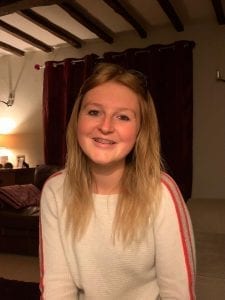 Staffordshire County Federation of Young Farmers Clubs (SCFYFC), like so many other youth organisations, have had to adapt and change to the ongoing challenges of the Covid 19 pandemic.  Despite Lockdown 2.0 and restrictions placed on clubs holding regular meetings for their members who are all aged 10 – 26 years, Staffordshire YFC is pleased to announce its new County Officer team have been elected for the coming year.  Since March the Federation moved all its regular meetings onto zoom, with some combining together whilst there was little face to face activity and planning over the Summer.  The County Staff who usually operate from the YFC Office based on the County Showground at Stafford moved to working from home and the organisation took to social media to keep members involved and active.  Numerous competitions were held including a Virtual Rally and County Show plus Thursday evenings of entertainment became a favourite with members past and present, with their take on “Play Your Cards Right” and “Would I Lie to You” as well as fun family quizzes.

During the last 12 months, Amy Boothby, member of Uttoxeter Young Farmers has been waiting for her year in office to arrive.  On Thursday, 12th November, she was elected as the County Chairlady to Staffordshire YFC at the County Executive Meeting, which was held via Zoom.  Amy, who has been a member of YFC for over seven years, has always got stuck into all things YFC, including numerous Public Speaking Competitions and Sports as well as taking on leadership roles in her club including Club Secretary, Club Programme Secretary and Safeguarding Officer.

Will Freeman, retiring County Chairman, was congratulated during the Executive Meeting, for continuing to lead the federation during the pandemic despite the cancellation of so many face to face events and competitions.  Newly elected Amy faces a challenge which no other County Chairlady has seen, as Covid 19 continues to hamper Staffordshire YFC’s usual programme of activities, which are very much reliant on face to face delivery.  However, she is not deterred.  Amy said “I’m so excited that the time has finally come for me to take on my role as County Chairlady! Although times are strange, I’m confident that as an organisation we will all pull together and see it through! During the upcoming year, I hope that we can begin to return to some form of normality and the usual opportunities and activities which YFC can offer.   I am determined to make it a fun year ahead!”

The County Officers Team lead the federations committees to plan and organise a programme of competitions, social events, learning and training opportunities during the year.  Coming up at the end of November, the Federation has adapted three of its usual competitions to the virtual world.  Member of the Year (19 and Over and 18 and Under) will be held via Zoom along with Situations Vacant, where members apply for a job of their choice, competitors had to submit a CV and covering letter prior to the competition and then participate in a ‘mock’ job interview. These competitions are kindly supported by B and B Tractors who will also be supporting the usual Public Speaking Day Competitions which will be held in February, all being well as a face to face delivery.

Due to the cancellation of the usual Christmas Tractor Run and Christmas Shopping Evening events held in December, the Federation has also added an extra Rally to its calendar, in virtual form.  The very first Staffordshire YFC Virtual Christmas Rally, with 16 classes, will be held via social media on Saturday 5th – Sunday 6th December.  Club members are already busy creating their entries into the classes which include, “Build a 3D Snowman” and “Club Christmas Song”.  Points from the Christmas Rally will count towards the main Staffordshire YFC Rally which it is hoped will be held in May 2021.

The cancellation of activities during the last 9 months has resulted in a loss of funding for Staffordshire YFC, who are hoping to be able to hold fundraising activities in the Spring and Summer.  In the meantime, the federation will be taking part in a National Federation of Young Farmers Clubs (NFYFC) Initiative, “Give it Some YFC Welly Relay” which will see Staffordshire YFC and its clubs pulling together to raise funds whilst covering the 140 miles which is the distance around the ten clubs.   More details on how to get involved and how you can donate to Staffordshire YFC, a registered charity, will be published very shortly.   In addition to this, a large fundraising Christmas Virtual Raffle is being planned, again via social media, to help with fundraising efforts for the charity.

To get involved in your local club, anyone aged between 10 – 26, is invited to contact the County office for details – email organiser@staffyoungfarmers.org.uk or call 01785 248645.