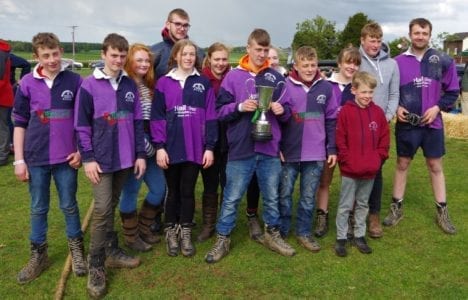 Staffordshire County Federation of Young Farmers Clubs (SCFYFC) County Rally was held on Saturday, 4th May at Blore Farm, Hales, nr Market Drayton by kind permission of The Lea & Baines Family and was once again this year, a great success for the strong ten Staffordshire YFC Clubs. The Rally day managed to stay dry with a great turnout of over 250 members along with sponsors and supporters to cheer on their Clubs in the various competitions. Members have been preparing weeks ahead to enter the Static Classes ranging from making “Hot Cross Buns,” creating patchwork blankets, sculpting a Recycled Tin Man and Photography as well as taking part in plenty of action competitions on the actual day including Bungee challenge, Potato Launching Competition and competing in the all-time favourite ‘Greasy Pole’ in order to try and win some silverware at the end of the Day.
Two of the National Federation of Young Farmers (NFYFC) Competitions were also held on the day, including the Floral Art. In the Junior Class, competitors were required to create an exhibit to the theme: ‘My Great Hobby’ An exhibit to depict a hobby or pastime with the winning entry coming from Lydia Taylor of Uttoxeter JNFU. In the Intermediate Class, the requirement was to create an exhibit to the theme “Great Craftsmanship” An exhibit to depict a particular craft., the winning entry was from Phillippa Titley of Ashley YFC. The Senior Class required competitors to create an exhibit to the theme “Great inventions that changed the world” An exhibit to depict an invention that changed the world, which was won by Hannah Britland of Uttoxeter JNFU. The three members will all go forward to compete in the NFYFC Finals held at the Malvern Autumn Show in September along with the runners up in each age category as well.

The main ring held a huge “Total Wipeout” Competition with teams of up to 6 members from each club taking part. This was a great success, with members loving the assault course of various challenges including jumping through tyres and crawling through tunnels with everything involving lots of water, the overall winners of the Sports Cup from this competition were Waterhouses YFC.

The highly competitive Junior Tug Of War competition, which is also a National Competition for 2019 sees the highest two place teams go forward to the Three Counties Show at Malvern in June. Members aged between 12 and 17 years from Cheadle YFC took 1st place with Waterhouses YFC coming a close second. The day was rounded off by the ever-popular Mixed Tug of War competition, which saw 4 teams taking part, and Waterhouses YFC, taking the silverware for the day, beating Eccleshall YFC in the final.

Back at Blore Farm that night, the Results and Trophies were announced and presented on by the hosts, Mr & Mrs Lea, at the Rally Dance. To view the full set of results please click here

Polly Baines, County Chairman of Staffordshire YFC said “This weekend has been a true representation of everything YFC! From teamwork and competitions to multiple incredible skills and best of all, fundraising for Cancer Research! Saturday not only saw a very busy County Rally but we also accommodated Uttoxeter Young Farmers going for it with their ‘Brave the Shave’ raising funds for Cancer Research. On Sunday, we organised a Charity Lunch called ‘Give Cancer the Boot’. Having been directly affected by my mum having the disease, it made the urge to raise funds for Cancer Research even more important. The afternoon was a great success with a funds of over £8000 being raised for this worthwhile charity! This weekend has shown how much “teamwork really does make the dream work!” Being a part of the Staffordshire YFC is fantastic, the support is amazing and I cannot thank everyone enough for their hard work, time and backing throughout this weekend!”