Archive for the ‘Uncategorised’ Category

A great night for Staffs YFC members in Leek competing in the County Darts Competition! On the oche!🎯

Thank you to the Ball Haye Tavern for hosting us once again!

After a full on day of competitions ranging from Potato Launching to Floral Art….. The Overall Results for the silverware were as follows:

For all the photos from a brilliant Rally Day held by kind permission of The Lea & Baines Family, please click here

Eight teams from around the County took part in the County Cookery Competition, the results were:

Thank you also goes to:

Barbers Rural for providing shopping bags and lists for the competitors.

Staffordshire Young Farmers Clubs (YFC) held their sixth successful Christmas Shopping Evening on Thursday 6th December at The Ingestre Suite on the County Showground, Stafford. The vast room was filled with 63 stalls from across the Staffordshire selling local produce including Nelsons Gin based just outside of Uttoxeter and The Wissage Bakehouse, who are based in Aston just outside of Stafford. Also attending was local Stone YFC member, Becky Roe has just launched her new company called “Pebble and Sage” designing original and unique prints, cards and invitations. Becky has also recently benefited from a grant from Staffordshire YFC, to help her with her design company, helping her business to flourish and grow.

The newly formed Cheadle YFC members also put their creative skills to the test and bought along a stall with handcrafted decorations and gift ideas to help raise funds for the Club.

The YFC Office had to set up a waiting list during the month before as stallholders were desperate to secure a pitch at this growingly popular event. Doors opened to the public at 6.30pm with a brisk trade all evening, with over 380 visitors who were greeted with a freshly baked mince pie and warmed mulled wine to set the festive scene for a great indoor shopping experience. The federation were well supported again by local turkey farmer Sandra Hopley based in Tixall, who kindly supplied hot turkey rolls on sale, which smelt delicious as everyone arrived.

There was also a raffle held during the evening, kindly supported by many of the stallholders who donated prizes and manned very well by Pav and Isobelle of Barclays Bank who very generously agreed to match fund on the evening through the Barclays Bank community initiative.

County Chairman, Polly Baines said “Once again this year, our Christmas Shopping Evening has exceeded all expectations. We are very grateful to the Staffordshire and Birmingham Agricultural Society for allowing us to use the fantastic showground facility to hold the event in. We like to encourage stalls with local produce, craft and unique goods that cannot be found on the high street to come along and they definitely did that on Thursday night, kickstarting to the festive shopping season for all our visitors in style.”

Staffordshire Young Farmers will be holding the evening again next year on Thursday 5th December as part of their vast calendar of events which raise funds for the organisation, which is a registered charity. This enables the Federation to provide support, training and competitions to its membership which is now over 550 young people aged 10 – 26 years.

Staffs YFC bringing “Magic and Mystery” to the County Show

Launching the County Show this year, Staffordshire Young Farmers Clubs host the Pre Show Reception on Tuesday 29th May. At the reception, the YFC members from around the 11 clubs in Staffordshire put on “YFC’s Got Talent” which has in the past included Ballet Dancing acts, synchronized swimming and some very funny comedy sketches. This year’s reception is kindly sponsored by Abbotsholme School, Rocester along with Stafford Land Rover dealers and will be attended by over 150 sponsors, supporters and invited guests of the Federation.

Staffordshire YFC will be showcasing just what being a young farmer is all about inside their marquee which is erected to the side of their purpose built office on the showground. The marquee is always a hive of activity, and with their theme this year being “Magic and Mystery” there will be plenty to see and do. Attractions inside the marquee this year include “Splat the Rat”, “Milk the Cow”, Scarecrow Competition and Hook a Duck. As well as all this, there is the National Male and Female Tug of War Competitions in the Main Ring on the Wednesday evening and the Show Float Competitions to the theme of “British Sitcoms” on Thursday afternoon. Clubs have already started to build their floats and the general public will be entertained greatly by their versions of Dad’s Army, Fawlty Towers and even Gavin and Stacey, parading in the main ring.

The Show Marquee has been kindly supported by Shires Vets again this year who have sponsored all YFC helpers with a free polo shirt as well as giving away joint Jute Goody Bags filled with items from Shires and Staffs YFC. 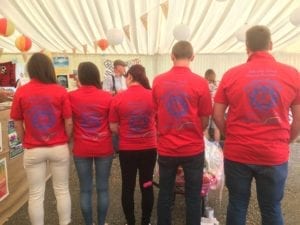 Making a special appearance at the County Show, the Federation’s Giant Wooden Oatcake, which is touring around the County will be available for a photo opportunity. The Oatcake started its tour with Ashley Young Farmers back in March and is currently with Ridware Young Farmers who are taking it on a Steam Engine Tour around Abbots Bromley this Sunday, 20th May. The purpose behind the giant Oatcake, is that whilst the Club has possession of it, the members hold an activity which will fundraise for Young Minds, the leading mental health charity for young people. So far, the clubs have raised in excess of £2800 towards this worthy cause, with six more clubs still left to hold their events. The most recent activity was Uttoxeter Young Farmers who peddled non-stop for 12 hours on an exercise bike at the County Annual Rally Day. The final event is a Beer Festival on 30th June being held outside the YFC Centre on the County Showground. The afternoon and evening event will feature 15 different beers, a bouncy castle for a family fun afternoon and live music in the evening. 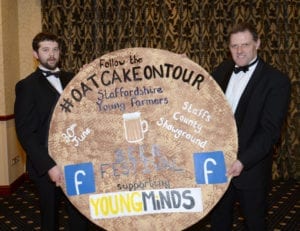 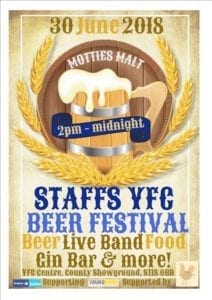 For information on becoming a member or details of your local Club, or details on any of the YFC activities, please come and visit the YFC Marquee at the County Show where we have many of our members who’d be happy to talk to you.

27 members from 9 clubs took part in this years Silage Competition, they travelled around three farms in the Hollington area finishing at The Farmers Arms, Withington for a well deserved carvery lunch.  The results were:

Photos from the day can be found HERE

Staffordshire Young Farmers celebrated the end of 2017, and slightly early celebrated the new year, at the County Showground. Pictures are in the Photos section of this website.

Lichfield YFC have a new top table for 2017-18.  Harri Dunne has been elected as Chairman, Eden Gray as Secretary and Jacob Sweetman-Wiley as Treasurer.  They have lots planned for Lichfield YFC so pop down to Sheepwash Farm on a Monday night to find out more! 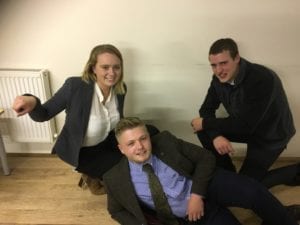 Leek YFC have a new top table for 2017-18.  Andrew Hill has been elected as Chairman, Beth Hicklin as Secretary and Meg Barnes as Treasurer.  They have lots planned for Leek YFC so pop down  to Leek Hockey Club on a Wednesday night to find out more! 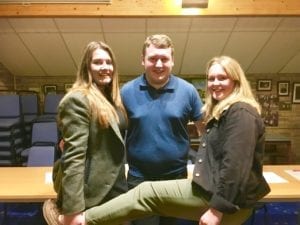 All Clubs are invited to enter a Scrapbook into the Annual Competition which is judged after Thursday 5th October when all books are due to be submitted. The Scrapbook Award is presented at the Annual General Meeting which is being held on Friday 10th November, 7pm at The Ingestre Suite, County Showground, Stafford.
For the Rules and Details of how your Club’s Scrapbook could take Staffordshire’s top spot for 2016/17, have a read below.